What happens when people bring their environmental complaints to a body gathered in the name of the world? In this lecture Cheryl Lousley, professor of English and Interdisciplinary Studies at Lakehead University, Canada, discusses the World Commission on Environment and Development's public hearings. 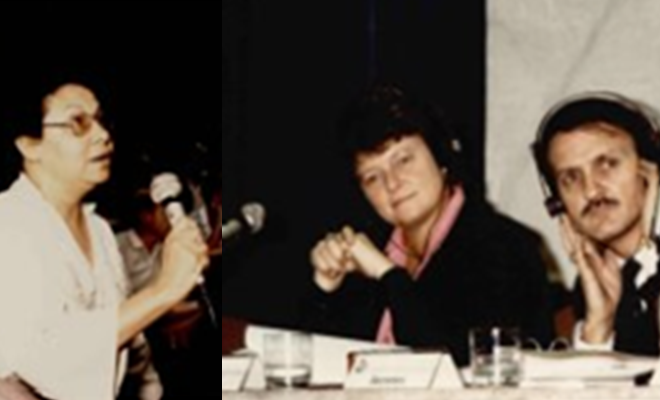 Sharing research on the public hearing and testimony archives of the World Commission on Environment and Development, whose 1987 report Our Common Future launched sustainable development, this talk attends to fugitive politics and sticky materialities at dramatic scenes where bursts of political-ecological struggle and desire were provisionally gathered around the promise and procedures of liberal internationalism. At the hearings, fugitive claims to the resources and potency of the world exposed fractures in the commission’s liberal imaginary and exceeded what could or would be contained by the idea of sustainable development. Their political and historical significance lies in this excess: in the democratic audacity to make claims on the institutions through which ecological conditions for living a good life were to be managed and distributed.

Dr. Cheryl Lousley, Associate Professor in English and Interdisciplinary Studies at Lakehead University (Canada), works on contemporary environmental justice writing and cultural studies. Her essays appears in the Oxford Handbook of Ecocriticism, Oxford Research Encyclopedia of Literary Theory, and Greening the Maple: Canadian Ecocriticism in Context, among other places. Her latest essay appears in a special "Neoliberal Environments" issue of Studies in Canadian Literature. Dr. Lousley has held a Fulbright Canada Research Chair at the University of California, Santa Barbara, an Environmental Humanities Fellowship at the University of Edinburgh, and a Carson Fellowship at the Rachel Carson Center, Munich. She is past president of the Association for Literature, Environment, and Culture in Canada and the founding series editor of the Environmental Humanities book series, published with Wilfrid Laurier University Press since 2007.