The first students are well into their work on the Honours Certificate in Environmental Humanities and Sciences at the University of Oslo. The result: Thorough and interdisciplinary knowledge – and two million views on Tiktok. 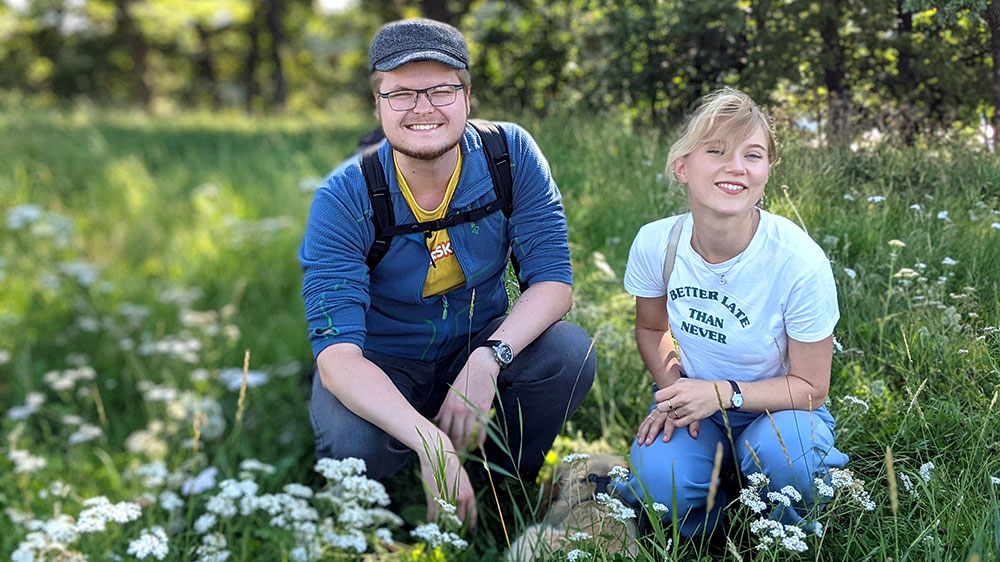 Tarjei Brekke og Marte Næss Thomassen are two of the students taking the Honours Certificate. They appreciate the perspectives they gain through this master's supplement. Photo: Silje Pileberg/UiO

“In other classes I've taken, there's always been someone who said they'd rather do something else. I haven't heard anyone say that here,” says Tarjei Brekke.

The Honours Certificate in Environmental Humanities and Sciences is a one-year 20-credit supplement that runs in parallel with your master's programme. The first year group started in the spring of 2021. Among them were Tarjei Brekke (24) and Marte Næss Thomassen (23).

“I find that I am seeing things from several perspectives now. And when I recently started a new job, the experience that this certificate has given me played a key role,” says Thomassen.

– An introduction to everything

Read more about the Honours Certificate on the programme pages

The application deadline for new students is 15. October.

The certificate is intended to increase the students' knowledge of climate and the environment, and challenge them to create projects where they communicate in new ways. All master’s students at the University of Oslo (UiO) can apply, and those who are admitted can choose whether they want to link the Honours Certificate project to their master's thesis.

For the first year group, the course started off with a bang in the spring of 2021 with a lecture series on the Anthropocene, the geological period which we are in right now. Several well-known UiO professors, including biologist Dag O. Hessen and social anthropologist Marianne Lien, talked about the Anthropocene geological period from their academic points of view. The course was digital and open to everyone, and around 2,000 people participated.

“It was like watching a documentary by David Attenborough. We were given a brief introduction to everything,” says Marte Næss Thomassen.

She and Brekke value the interdisciplinary nature of the programme, which characterises both the lectures and the collaboration between the students, since they have different study backgrounds. They have also been on excursions to urban farm projects and to the Oslo fjord to learn more about local environmental challenges.

“I have thought for a long time that it is important to conduct research on China. Through this  course I have seen that there are other places and issues that are also important. Among other things, we have learned about the work to save endangered species in Norway,” says Brekke.

One story and many films

He is writing his thesis on the Chinese long-distance fishing fleet, which is the world's largest. In his honours project, he deals with the subject of pollination. He assumes that in the future drones can be produced that will be able to take over the work of endangered insects. In a story set in the future in a Chinese province, he writes about how this might play out.

“I study what it means to imitate nature. The result may be that we either don’t get a perfect copy of what we have, or that the product doesn’t obey our wishes. I hope to convey this in the story I am writing,” he says.

Thomassen is in the early stages of a thesis on food production. In her honours project, she deals with the subject of ‘dumpster diving’: collecting food from waste containers outside grocery stores. On Tiktok, she and a fellow student post videos about this and the food chain in general. One of the films has had two million views.

“Throwing away food is an important reason for CO2emissions. In addition, it's a huge social problem, since many people are starving. However, this is a problem that can be fixed,” says Thomassen.

Must think both deeply and broadly

Ursula Münster, social anthropologist and head of Oslo School of Environmental Humanities, is responsible for the teaching. She explains that the Honours Certificate was instigated by students who wanted to learn more about climate and the environment.

“One of the ideas behind this is that we need networks if we are going to solve these problems. We need a new generation that is able to communicate, but also think together,” says Münster.

“This certificate can be a start.”

The fact that the students' research can be communicated in creative ways, such as by films, sound, poems and stories, is not purely coincidental. Artist Rebecca Birch has been hired to assist the students with finding good forms of communication.

“We have to find new ways of communicating. Research reports are very abstract and are not accessible for everyone,” says Münster.

Another form of work

Even though the Honours Certificate runs in parallel with the master's programme, Thomassen and Brekke still aim to finish in two years.

“It's not an overwhelming amount of work at all,” Brekke says.

Thomassen believes the certificate offers a different form of work.

“When you take a master's degree, you study a subject in depth. In this study programme you learn a little about many subjects, and then you think more creatively in the way you communicate. It doesn't feel like a lot of work,” she says.

As of now, 25 students are admitted to the certificate each year. Ursula Münster hopes that in the long term there may be more.

“Today it is grades that determine who is admitted, but we are working to change this. We don't want it to be an elite programme. In the long term, we hope that anyone who wants to take an Honours Certificate can do so. Because this is knowledge we need,” says Münster.

Read more about the Honours Certificate on the programme pages