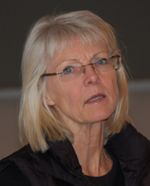 1996 -    Professor, chair in Prehistoric Archaeology, University of Oslo (N) and Head of the Nordic Graduate School, Dialogues with the Past

2005-09 Head of the PhD programme in Cultural History, Faculty of Humanities, UiO

2005-08 Board member, Institute of Archaeology, Conservation and History, UiO

2006-09 Head of the Nordic Graduate School in Archaeology, Dialogues with the Past NordForsk

2007-09 Member of the committee for humanities, Norwegian Research Council (NO)

2007      Head of the assessment committee for Centre for Gender Studies (SKK), UiO

2009      Member of the committee for grand applications, Bank of Sweden Tercentenary Foundation

2009-12 Head of Institute of Archaeology, Conservation and History

2010      Member of the assessment committee for archaeology, University of Reykjavik

2013 –    Head of the Nordic Graduate School in Archaeology, Dialogues with the Past, UiO

2005      Norwegian Academy of Science and Letters

2015     Invited member of the Shanghai Archaeological Forum of the Institute of Archaeology, Chinese Academy of Social Science.