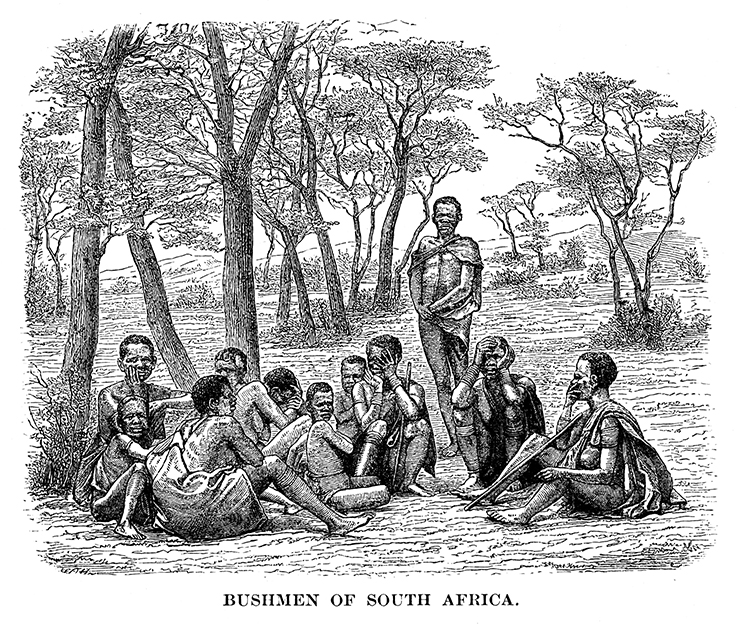 It is said that “clothes maketh the man”.

It is therefore a paradox that researchers have not shown more interest in the dress of the San hunter-gatherers, historically among the most studied groups of people in the world. Vibeke Maria Viestad, a senior lecturer at the Department of Archaeology, Conservation and History at the University of Oslo, believes this is so because of a prevailing myth about “the nearly naked bushman”.

“The San people dressed differently from us, often with a bare upper body, and were therefore perceived as naked when first met by Europeans. This view was commonplace in travel descriptions and early research and also found its way into modern anthropology of the 1950s,” she says.

The early research on “the others” - research often more racist than scientific - was often more concerned with the physiological differences between different peoples. Researchers measured the skull, rump and breast and were blind to the meaning of such cultural elements as clothes.

Extinct hunter gatherer culture
Viestad makes up for these scientific sins of omission in a new book where she endeavours to find an answer to what dress practices meant to the San people who lived as hunter gatherers in the area that is now the province of Northern Cape in South Africa.

The archaeologist has studied oral myths and folklore of the /Xam - the diagonal indicates a clicking sound – that were noted down in the 1870s. /Xam is one of the many different groups of San people, and this material provides a unique source for understanding an extinct language and a culture that is no longer practised.

The stories filled 138 notebooks when they were noted down and have since been digitalised. These are stories about everyday life and hunting, animals and plants, myths and folklores and - for someone who is interested in this specifically- a lot of information about dress and dress practices.

Because dressing the body was definitely part of /Xam culture.

“They used karosses, loincloths, different headgear, bags, leather shoes, tobacco pouches and jewellery; especially sought after was bead work from the shells of ostrich eggs. Dress was an essential part of both material and social culture,” says Viestad.

She uses a broad definition of the term “dress”. This covers both things worn on the body and things done to the body, such as tattoos, painting oneself, cutting patterns in the skin or applying scent. Like clothing, such “bodily modifications” were also an important part of the culture of the /Xam.

Generated social relationships between animals and people
Viestad’s research shows that clothes, jewellery, tattoos and the like had many of the same functions for the /Xam and other San peoples as it has for us. They marked identity and social belonging, were important for transition rituals, functioned as decorations and as a basis for widespread barter trade. Some were masters at making bags from turtle shells, others in the preparation of skin work.

“In addition to these easily recognisable functions, clothes also played a direct and essential role in creating and maintaining social relations,” says Viestad, who underlines that the /Xam people did not distinguish between people and other creatures in the same way we do.

“It gives meaning to say that they formed relationships with people, animals, water and other parts of nature,” she says.

Viestad describes a characteristic dichotomy in the /Xam people’s relations with animals:

“On the one hand, it was the clothes that separated humans from animals. At the same time, they made their clothes from the animals and part of that animal identity remained in the clothes, so that a strong relationship arose between animal and human.

They also believed that if you did not show respect to animals and other creatures, you risked your clothes returning to their original nature. A garment of antelope leather could go back to being an antelope. They did not believe this in a literal sense, but more as an image of the world becoming chaotic if you did not maintain good relations with your surroundings.

Angry and soft rain
In the context of hunting rituals, medical rituals and rituals linked to rain and water, tattoos, cuts in the skin and the application of scent were the most important part of their dress.

“The purpose of such modifications of the body seems for the most part to have been protective, preventive or auspicious, but was also about these close relationships with nature, where other creatures were shown respect,” says Viestad.

She tells among other things that before the young /Xam girls could approach the water, they had to powder themselves with fragrant herbs, which they also had to sprinkle over the water.

“In this way, they created a bond between themselves and the water and showed respect. This was important so that they would get ‘soft rain’, making the earth fertile instead of ‘angry rain’ that just destroyed and washed the earth away.

"In this way, the hunter linked himself to the animal and showed it respect," explains Viestad.

It is also believed that tattooing was a normal hunting ritual, where the men cut themselves and rubbed in charcoal made from the same root. When the cuts healed, the charcoal remained under the skin, something that could generate a stronger and more lasting relationship with the animals they were hunting.

Viestad explains that a similar custom is known from other groups of San people living in the Kalahari in the 1950’s and 60’s, but that they used charred meat from the last animal they had killed.

“Such customs might seem strange to us, but in their world these were part of important strategies for survival and for maintaining order in their existence,” says Viestad.

“This story tells us that the shoe was once an eland and that the eland could become a shoe; that there was not a sharp distinction between the two,” explains Viestad.

When shamans or sorcerers used headgear made from springbok scalps in order for the springbok to follow them, we might presume that same type of logic.

“The springbok was the most important source for food and clothing and a person wearing a cap made from such springbok leather might under certain circumstances have had a perceived special relationship with this animal,” says the researcher.

Important for personal relationships
The /Xam people also strongly related to each other through their clothing. It was for example the men who made all the leather clothes and when they got married, they dressed the wives ‘into the marriage’.

The men also made leather clothing for the children; in this way they gave something of themselves via the clothes.

Two great collections
While working on the book, Viestad has also studied and compared two collections that document the clothes worn by different groups of San people in the early 1900s. The collections contained photographs, written documents, clothes, jewellery, bags and many other artefacts.

One of these was collected by Dorothea Bleek, who most probably had been asked to obtain artefacts for a museum exhibition while she was doing linguistic research among San people in the Northern Cape and later in the Kalahari. The at the time Medical Officer of South West Africa, Dr Louis Fourie created an even more extensive collection containing more than 3,400 artefacts and 350 pictures.

“Bleek used a more traditional approach and emphasised that the clothes were associated with what role you held in the social structure, meaning gender, age, if one was married and so on. She was not especially interested in the differences between the different San people, while Fourie, who was more interested in the material culture as a starting point, could see great differences in the clothing between different groups,” explains Viestad.

Shows human diversity
With this book, Viestad helps to fill a gap in our knowledge of some of the otherwise most studied groups of peoples in the world in ethnographic and anthropological research.

For herself, she is mostly concerned that the book provides an example of an enormous human diversity.

“I feel it is important to explore other ways of thinking about the body, the world and social relationships. This might appear naive, but we need research that proves that there are and have been very different ways of understanding the world. Such knowledge can give us greater understanding of each other,” she says.

Archaeologist Vibeke Maria Viestad is also a participant in the research initiative Heritage Experience Initiative at the Faculty of Humanities, which will start in 2019.