Naxos is the largest island of the Cyclades at 429 km2. The highest mountain is Mt Zeus at 1003 metres above sea level. There are four peaks above 800 m that together form a central ridge running north south across the island. Naxos is large enough to create its own weather, which gives the island higher rainfall than other Aegean Islands. Running west from the mountain ridge is a system of fertile valleys making Naxos the most productive island in the Cyclades.

The Island has today a population of 19,000. Chora, the main town and port, has traditionally been the island's largest settlement, although the inland districts and villages of Apiranthos, Melanes, Potamia, Chalki, Glinado and Filoti represent important settlements. 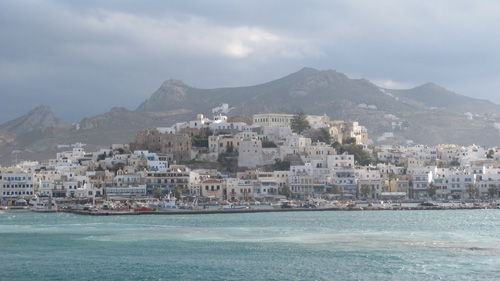 Chora from the sea