The survey at Kastro Apalirou

Kastro Apalirou is located on a mountaintop, and there is no water except for what can be collected by rainwater cisterns. The location was chosen for defensive reasons and consequently all other functional aspects normally connected to an urban site become logistically compromised. That Apalirou remained in use for so long is witness to just how unstable the Eastern Mediterranean had become and how long the period of instability existed.

Kastro Apalirou may seem inaccessible at first sight. However, a closer examination reveals two paths leading down from Apalirou to the south and north. The paths have been cut into the hillside and built up in certain places, and a mule and fit person could make the climb in 35 minutes.

Little is known about how and when Kastro Apalirou was founded. More is known about the end of Apalirou in 1207 when it was besieged and taken by the Venetian Marco Sanudo. It is assumed, then, that Apalirou was founded as a refuge during the insecurity of the 7th century AD due to piracy and Arab expansion in the Mediterranean, and that it remained necessary to keep the political administration of Naxos there until the 13th century.

That Naxos was targeted for a military campaign was due to its strategic location, it resources but not least, that Apalirou might have been garrisoned from 1207 with Genovese soldiers/mercenaries. If so, this fact must have precipitated the Venetian reaction, and the establishment of a Duchy of the Aegean in 1207 was seen as necessary by Venice. Apalirou had caused a territorial conflict to spiral into the taking of land, and the political consolidation of the Aegean.

The UiO survey that started in October 2010 has identified some of the logistical compromises made necessary by building and maintaining an urban community in such and inaccessible site.

- Careful use of mortar used only for defense and cisterns.
- Limited use of roof tiles: either roved with stone from the mountain or with organic material that is no longer visible.
- Massive use of rainwater cisterns.
- Garden terraces built below the walls, manured with waste from the city.
- It is possible that a system was in place to offload/reload supplies from wagons or carts onto mules in the valley below, perhaps at one of the farms or even the churches, and that a system for taking people and goods up and down was in place at certain times. 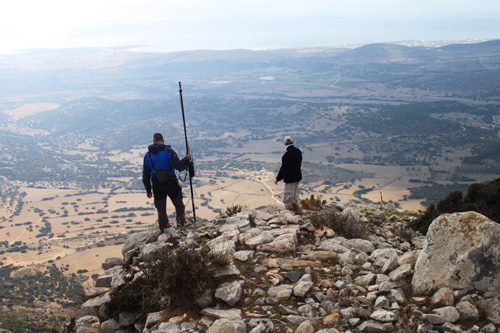