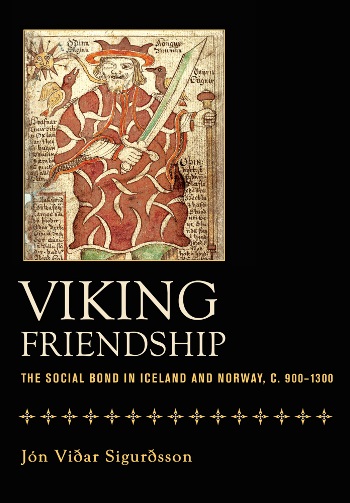 Drawing on a wide range of Icelandic sagas and other sources, Sigurdsson details how loyalties between friends were established and maintained. The key elements of Viking friendship, he shows, were protection and generosity, which was most often expressed through gift giving and feasting. In a society without institutions that could guarantee support and security, these were crucial means of structuring mutual assistance. As a political force, friendship was essential in the decentralized Free State period in Iceland's history (from its settlement about 800 until it came under Norwegian control in the years 1262–1264) as local chieftains vied for power and peace.

In Norway, where authority was more centralized, kings attempted to use friendship to secure the loyalty of their subjects.The strong reciprocal demands of Viking friendship also informed the relationship that individuals had both with the Old Norse gods and, after 1000, with Christianity's God and saints. Addressing such other aspects as the possibility of friendship between women and the relationship between friendship and kinship, Sigurdsson concludes by tracing the decline of friendship as the fundamental social bond in Iceland as a consequence of Norwegian rule.