Larisa Dryansky on Mel Bochner: Between Minimalism and the Rise of Computer Imagery

In this lecture, Larisa Dryansky (Sorbonne) discusses parallels between 1960s artistic investigations of the relation between image and object, materiality and illusion, and computer scientists’ simultaneous quest for building 3D images. 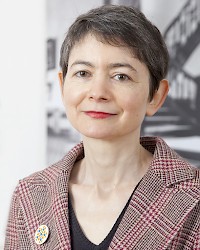 2D, 3D, 4D: Mel Bocher, Between Minimalism and the Rise of Computer Imagery Between 1966 and 1969, the American post-minimalist artist Mel Bochner produced an important body of photographic work in which he explored spatial ambiguity and virtual materiality or, in his words, “non-existent tactility.” Taking as its cue Bochner’s plans to make artworks with the help of computer technology as part of an artist-in-residence program organized in 1968 by Experiments in Art and Technology, my paper situates the artist’s approach at this time in dialogue with the contemporaneous emergence of 3D imagery. Bochner’s interest in the symbolic logic that is at the root of information theory is well-known and the echoes between his use of mathematical diagrams and coding processes have already been addressed. In a different way, this study focuses on the parallels between, on the one hand, Bochner’s repeated investigation of the relation between two-dimensionality and three-dimensionality, image and object, and, on the other, computer scientists’ quest for building an image in space. Although the artist’s engagement with technology was definitely not free from all reserve and he was more than skeptical about the first experiments of computer art also being developed in the 1960s, his fascination with the interplay of materiality and illusion overlapped with the generation of a new kind of spatiality in computer imagery. This connection appears less surprising when traced back to a common source of inspiration: theories of four-dimensional space. A space that is neither the projected space of perspective, nor the “real space” of three dimensions, as the minimalist Donald Judd famously put it, 4D space, I want to suggest, appeared at this juncture as a model to address anew the reality of images.

Larisa Dryansky is Associate Professor of Contemporary Art History at Sorbonne Université. Her research focuses on the intersections of art, science, and technology in postwar and contemporary art and on technological images (photography, film, video). Her current book project is an investigation of artists’ engagement with the concept of antimatter, a topic introduced in her essay “Another Matter: Antimatter and the Dematerialization of Art” (in C. Berger [ed.], Conceptualism and Materiality, 2019) and in a study of Jean Dubuffet and photography (“La Matérialité stéréoscopique de l’œuvre de Jean Dubuffet,” Plastik, n. 10, January 2022). Her previous book, Cartophotographies. Du Land Art à l’art conceptuel (2017), addressed the combined uses of photography and cartography in American art of the 1960s. She has co-edited several volumes, including recently Repenser le médium. Art contemporain et cinéma (2022). From 2014 to 2016, she was Senior Fellow in charge of contemporary art programs at the French National Art Institute (INHA).

Seminar of Aesthetics
E-mail this page