New findings on the last poet of antiquity

Dioscorus of Aphrodito was the last poet of antiquity. Most likely, he was also involved in business with a monastery; this we can learn from a letter from the 6th century. The papyrus document belongs to the University of Oslo Library. 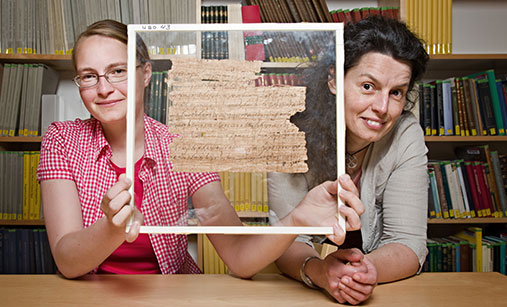 Anastasia Maravela (right), professor of Greek at UiO, heads the team studying the papyruses in the University of Oslo Library. The team also includes Joanne Vera Stolk (left), PhD student, who is here showing us the papyrus fragment that has been found to provide new knowledge on the last poet of antiquity. (Photo: John Hughes)

The largest collection in the Nordic region of papyrus fragments from ancient Egypt is located in a room with glass walls on the third floor of the University Library at Blindern campus. The letter that provides new knowledge about the last poet of antiquity is one of several, as yet unpublished, papyrus texts from the Oslo collection.

“On initial reading this appeared to be a fairly ordinary letter from Byzantium, written some time during the 6th century CE. One never quite knows what one may find when starting to decipher such a text,” Anastasia Maravela says. She is professor of Ancient Greek and heads the team studying the papyrus fragments at UiO.

“Most of the fragments are in Greek, which was the dominant language of culture and administration in Egypt at that time. Deciphering Greek cursive handwriting is not easy, especially when such mundane documents as this one are involved,” the papyrologist Maravela points out.

“Often, just a single word will set you on the right track,” says Joanne Vera Stolk, one of the PhD students in the research team. It was she who deciphered the fragment with inventory number 523, and was thus the first to discover that this apparently mundane letter provides us with new and significant knowledge about Flavius Dioscorus of Aphrodito, the last poet of antiquity.

“A real accomplishment,” Maravela says about the work of her PhD student, and tells us that the fragment has two sides. On the front is the letter, and on the back somebody has noted a list of expenses.

Includes information on clothes ordered for his wife

The letter proves to describe cultivated land that had yielded less return than expected.

In the first line of the letter, the name Apa Souros turns up. And this is interesting, because the monastery consecrated to Apa Souros thus proves to have a link to Dioscorus, Stolk says.

The land described in the letter belonged to the monastery, but was leased to someone else, possibly Dioscorus. The PhD student has also found the name of the person who wrote the letter: Ammonios.

“We cannot say for certain who this is. However, it could be a known person who is already referred to in the papyrus archives that belonged to Dioscorus. Possibly, Dioscorus is also the letter’s addressee. Anyway, in some way or other the letter finally ended up with him.”

“Because it is Dioscorus, whose handwriting we know, who has written the list on the back.”

On the back of the fragment the poet Dioscorus, who was also a lawyer, has made a list of sums of money that he owed to people. He referred to it as a “list of various expenses”. At the very end of the list he has also made a note of some clothes he has ordered for Sophia, his wife, Stolk explains.

“At that time, it was common to use the back of letters for writing,” Maravela points out. “When a letter had been read, the near-empty back, with only the address written on it, was used to make notes, for example lists of items or drafts of documents.”

The papyrus fragment with the letter and the list on the back is an important contribution to the research on Dioscorus. Its most valuable aspect is the connection between the three: the Souros monastery, Dioscorus and Ammonios. Various documents on all these exist, but the business connection between them is a new discovery. 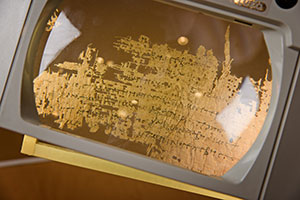 UiO’s papyrus research group was previously regarded as one of the world’s best. It is now in the process of returning to its role as a prominent centre of papyrology. (Photo: John Hughes)

“The fact that Dioscorus most likely maintained contact with the Souros monastery at a business level has not previously been documented by other sources,” Maravela points out.

The papyrus fragment joins a large group of texts that document the life and work of Dioscorus in detail. The handwritten poems of the last poet of antiquity, written on papyrus, were discovered in a jar in 1905, and are currently located in libraries and museums around the world. The collaborators with the research team at UiO include Jean-Luc Fournet, a specialist on Dioscorus at Paris-Sorbonne University.

“About Dioscorus, we also know that his village, Aphrodito, had problems paying the taxes demanded by the emperor, and that Dioscorus went to Constantinople. Most likely, he was the head of a delegation to the emperor. The letter that has now been deciphered confirms what we know from other sources, that Dioscorus was also a land owner and cultivator. In addition, it indicates that he perhaps also cultivated land that belonged to the Apa Souros monastery.”

Like many other papyrus fragments, the letter also provides us with new knowledge about Christianity as a historical phenomenon.

“It tells us, for example, that the monasteries were not exclusively spiritual institutions, but that they were also deeply involved in secular life, in this case agriculture,” Maravela explains.

Much of our knowledge on Dioscorus and his life and work he has provided himself. The last poet of antiquity did in fact write poetry about his contemporary time.

Papyrus was used all over the Mediterranean region, but it is only in Egypt that the papyrus scrolls have survived without disintegrating, because the dry desert wind hamsin helped cover them in completely dry sand. The papyrus texts bring us as close as we can come to the people who lived in antiquity.

“The papyrus texts are original sources and thus very important to philologists, historians and others,” Maravela points out. “But the fragments have many holes in them, and we therefore need to read parallel texts to fill in what has been lost.”

The research team at UiO will publish a total of two volumes with annotated versions of fragments from the Oslo collection. Not only will the texts be translated and provided with annotations that explain and comment on their language and content, the texts will also be placed in their proper historical, linguistic and cultural context.

“Many enigmas and previously undiscovered things are found here. Some of our latest findings include two fragments that proved to be connected. One of them documents a visit by Emperor Septimius Severus to Egypt. It’s a judicial decision sent from Syria, and it’s provided with a date. We know that the emperor visited Egypt in the years 199 and 200 CE, and stayed in Syria for two years after that,” Maravela tells us.

Another important fragment has turned out to be a Christian letter of recommendation from the late 2nd or early 3rd century. It refers to a young boy and another person, probably the boy’s father. The boy is characterized as a believer and his father as “under catechesis”. The letter has been signed by a large number of persons who most likely are officials and members of a Christian congregation.

“The letter documents the spread of Christianity in Egypt in a unique manner,” Maravela states.