UiO Faculty of Humanities Department of Philosophy, Classics, History of Art and Ideas
Main navigation
Back to uio.no
Sub navigation Menu
Research > Research news and events > Research news > 2017 > Antarctica: Everyone wants it, but no one owns it 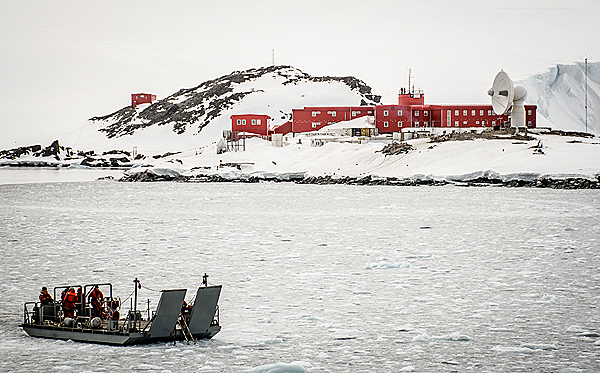 Queen Maud's Land constitutes one sixth of Antarctica, and Norway has claimed this territory since 1939, but this has never been approved by the rest of the world. The same applies to the claims of six other countries; New Zealand, Australia, France, Great Britain, Chile and Argentina have all made territorial claims over different parts of Antarctica. All of these countries also believe that they have an entitlement to the South Pole.

A group of philosophers from Norway, Ireland, Canada, Australia, the United Kingdom and Chile are now getting to grips with this matter. They believe that it is high time to look at these claims from a moral point of view.

"Global pressure on natural resources in the Antarctic will only increase over the next few decades. We now have the opportunity to influence decisions", says Associate Professor Alejandra Mancilla, the head of the recently established three-year project entitled “Political Philosophy Looks to Antarctica: Sovereignty, Resource Rights and Legitimacy in the Antarctic Treaty System." , funded by the Norwegian Research Council.

Mancilla herself grew up in the town of Punta Arenas in Chile, a stop-over base for most people flying to Antarctica. This city is also home to the Chilean Antarctic Institute (NACH) at which Mancilla was a guest researcher for two years.

She says: "Most Chileans would say that they own part of Antarctica, but it is not that simple. When I realised how complicated it was, I thought that it was something that needed to be researched."

A question of morals

Researchers in several different academic fields have studied the issues relating to the ownership of Antarctica. Among other things they have identified the objectives of the various different parties involved. They have also investigated the tensions and challenges that these place on the provisions of the Antarctic Treaty (1961) which lays down the legal framework for activities in the area.

But for the first time it is philosophers who are subjecting this continent to close scrutiny.

"Politics is not just about power and rhetoric. It is also about adhering to a few basic moral principles, something that people tend to forget when it comes to international politics," says the project leader..

The researchers will carry out investigations in order to find the answers to several moral questions. In the first part of the project they ask what constitutes a fair distribution of the continent's natural resources. They also ask if there are any nations, or groups of nations, which have better reasons for their territorial claims than others. Furthermore, what are the duties of those nations claiming territory when it comes down to looking after the environment in this vulnerable continent?

Is the Antarctic Treaty a rich man's club?

In the second part of the project the researchers are looking more closely at the Antarctic Treaty, a unique international agreement which came into force in 1961. This treaty provides the framework for administration of the continent and one of the major questions raised is about whether or not the Treaty is politically legitimate.

"Fifty three states are currently signatories of the Treaty. Twenty nine of them have consultative (voting) rights and are all engaged in research in the continent. They meet once a year, sit down and take measures, decisions and resolutions. The remaining 24 states may attempt to exert influence, and the same applies to observers and experts," explains Dr. Mancilla.

However, the project team wonders whether the system is really fair when only those countries which are engaged in research are allowed to decide

"One of the consequences of this framework in respect of research activities is that poor countries will never be able to have the opportunity to make decisions about Antarctica. South Africa is the only African country represented. Is this a fair system, or is the Antarctic Treaty a rich man's club? How can it be made more fair?"

The question of sovereignty

At the same time the Treaty is a good example of the fact that the states involved have actually managed to agree about some guidelines without the question of sovereignty being finally resolved.

"Historically speaking this could have been much worse! The states involved have managed to sit down and draw up a few rules. In Article IV they have agreed to put the question of sovereignty to one side and rather focus on what they can achieve together without being obsessed about who owns what," says Mancilla.

The parties to the Treaty have managed to agree about important decisions relating to the conservation of nature and the environment. In 1991 they banned the prospection and extraction of minerals in the continent, a decision which can only be amended by a majority vote up until 2048, and which will probably continue to apply afterwards as well. In October 2016 it was also decided that 1.57 million square kilometers in the Ross Sea to the west of Antarctica would become the world's largest marine conservation area. No one will be allowed to engage in commercial fishing activities there for the next 35 years.

There are still many unanswered questions. The Antarctic is facing some major challenges, both external and internal. Among the former are climate change,the growth of tourism, and the increase in bioprospecting and fishing in the area, Among the latter isthe consensus requirement in the Antarctic Treaty, which makes that it takes time and effort to reach decisions.

"The system is far from perfect. However, it is possible that the Antarctic Treaty could set an example for other areas over which no states have sovereignty,like international waters," says Alejandra Mancilla.

More about this research: