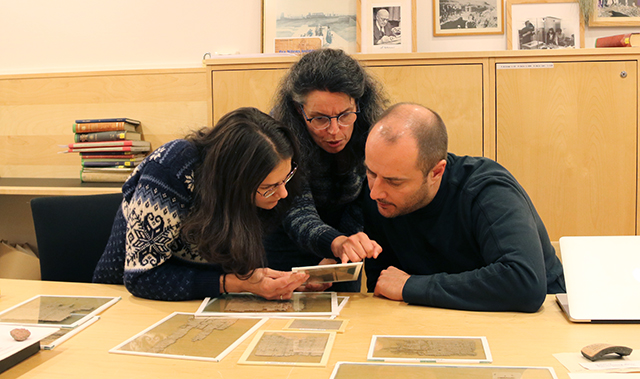 On a country road a young man is walking with an older man, possibly his father. The younger man is called Artemidoros and the older man is called Heracles. They are on their way to the Egyptian city of Oxyrhynchus sometime in the second half of the third century A.D.

With them in their luggage they have a letter from their church leader that they will deliver when they arrive. They are taking very good care of the letter. This is because it says that the two travellers must be well received - with Christian love and peace.

1,700 years later the letter is on a table in the library at the University of Oslo. Three papyrus researchers - Anastasia Maravela, Ágnes Mihálykó Tóthné and Jens Mangerud – are carefully reading and interpreting it.

- In the letter, the younger man is referred to as a "believer", while it says the older "was undergoing religious instruction". This shows the situation in a family during the transition from a pagan society to Christianity. Perhaps the father had become Christian, but had the son baptised before himself, said Anastasia Maravela.

Maravela is a professor of Greek and Latin. Now she is leading a group of researchers who are studying unpublished fragments in the Oslo University Library papyrus collection. This Christian letter of recommendation is just one of over two thousand texts in the collection.

The collection was acquired in the period from 1910 to 1936. It was two Professors of Classics, Samson Eitrem and Leiv Amundsen, who purchased the texts on behalf of the University Library from various antique dealers.

The most important of these was Maurice Nahman in Cairo. At this time papyrus fragments were traded legally on the antique market in Egypt.

- The texts do not come from organised excavations and therefore have an uncertain geographical provenance. Nevertheless, there is a lot we can find out about their origins. Some texts contain place names or names of people that are discussed in other contexts. We also know that there were regional differences in language, and the wording of a text can therefore tell us a lot about where it comes from, says Maravela.

Pieces in a jigsaw puzzle

Most of the papyrus texts are missing large or small pieces. The researchers are studying other texts and making comparisons with them in order to fill in the parts that are missing.

- When part of the text is missing, we can search in the international digital database of papyrus texts. If we are lucky, we find similar wording in other texts as the texts on papyrus are often formulaic. Occasionally we are lucky and find that bits we are missing have been preserved but sold to another collection. Even if we do not find what is missing, we may find something about the same person, place or other factors that can supplement the understanding of the text, continues Mangerud.

It is a great advantage of digital databases. Solving the historical jigsaw puzzle is a global collaboration, and the UiO researchers are contributing their pieces by making material from their project available to other researchers all over the world.

A different voice than that of the victors

The texts in the UiO’s papyrus collection are varied. There are personal letters, but also receipts, tax returns and contracts of various types. The common feature is that the texts concern the lives of ordinary people.

- It is often said that history is written by the victors. Rulers and their actions glorified by the official writers of history Here we get the opposite, because these are texts that are not written by important people or intended for posterity, says Mangerud.

Recently, he has in particular studied texts that are included in archives. Both authorities and private individuals saved important documents, but such archives are often scattered among various collections.

An example is the Egyptian man Zoilos. He was born around the year 0 and was as a young man in the Roman army where he took the name Pompeius Niger. Roman soldiers were not allowed to get married, but Mangerud believes Zoilos was a cunning person.

- New documents in the Oslo collection suggest that he had a secret wife. There was a woman named Didyme who lived in his house and at the same time lent him money. She had a son named Syros, says Mangerud who continues:

– Syros was also the name of the father of Zoilos. Then as now, it was common to name children after grandparents. Much suggests that Syros was the son of Zoilos and that Didyme was his illegitimate wife. Both the lease and loan were probably fictitious. We see how people also at that time found ways to circumvent the laws.

People who are similar to us

Through analysing the texts the researchers get close to the everyday lives of people who lived 2,000 years ago.

- We cannot get any closer to their feelings and experiences than through these papyrus texts. They are about love, money problems, quarrels, sickness and family relationships. These were people who are like us today, says Ágnes Mihálykó Tóthné.

The researchers believe more knowledge about the lives of those who have lived before us can provide several answers to why the world is as it is today. They are working to publish two volumes with copies of a large number of the unpublished Greek and Coptic texts and thus continue the series "Papyri Osloenses" (The Oslo Papyri) that Samson Eitrem and Leiv Amundsen published in three volumes between 1925 and 1936.

By Fillip-André Baarøy
E-mail this page
UiO > Faculty of Humanities >
Department of Philosophy, Classics, History of Art and Ideas > Research >