It was not only in Florence that Birgitta’s texts and message of reform enjoyed attention by Italian scribes and printers; further to Latin and vernacular manuscripts, numerous editions or extracts of Revelaciones were published in Rome after 1510 as the publishing boom of the sixteenth century began. 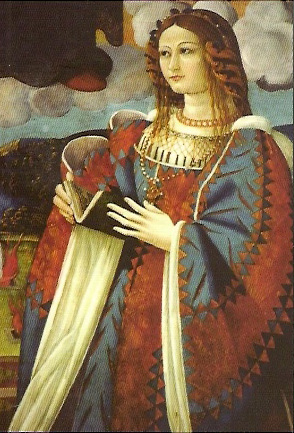 Nearly two hundred years after Birgitta’s death, the Rome of the 1530s and 1540s was a city in which Birgitta herself might have felt very much at home. The debate over Church reform was in full swing, and leading figures included Michelangelo Buonarroti, Bernardino Ochino, and Reginald Pole. Just as Birgitta had made herself a central figure in the fourteenth-century debate over the Avignon Papacy, Vittoria Colonna (1490–1547) was central to the sixteenth-century debate on reform.

While there has been much scholarly work done on Colonna as an influence in Reformation-era Rome, she has yet to be linked to Birgitta, despite their similarities as prominent widows, religious authors, and female reform leaders in the city of Rome, and Colonna’s careful attention to her own image as a spiritual woman. Of great importance is Birgitta’s close connection to the mighty Colonna family during her years in Rome; we may assume that Vittoria Colonna recalled these bonds in her own self-fashioning as a prominent widow and female writer of spiritual work. Among other noteworthy connections between the two women, in 1558 the prominent publisher Lodovico Domenichi translated Birgitta’s Vita at the request of the Florentine noblewoman Margherita Acciaiuoli de’ Borgherini; the following year, he published his landmark anthology of Italian women poets, which included numerous poems by Colonna.

In the same period, Colonna’s exact contemporary, the Swedish clergyman and writer Olaus Magnus (1490–1557), was also in Rome. After the success of the Protestant Reformation in Sweden, Magnus chose to remain a Catholic. As a result, he was exiled, and settled in Rome permanently in 1537. Pope Paul III named him Archbishop of Uppsala in 1544; he also attended the Council of Trent between 1545 and 1549. Birgitta’s legacy as a Catholic saint in Rome proved crucially important to Magnus’s identity as a Catholic in Rome: he lived in the Casa di Santa Brigida on Piazza Farnese, and developed a printing press there. In 1557, the year of his death, he published an edition of Birgitta’s Revelaciones at the press in her own house.