The impact of Birgitta’s legacy and writings on Renaissance and Reformation Italy has yet to be fully explored, and there is still much to be revealed. 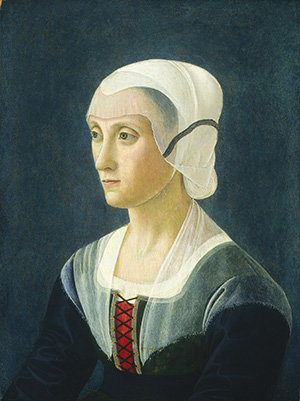 In the decades after Birgitta’s death in Rome in 1373 and her canonization in 1391, the leading scriptorium was to be found in Naples, where a strong Birgitta cult emerged. Other important centres in the early fifteenth century were the two Birgittine monasteries: one in Florence, Paradiso in the Pian di Ripoli (1394–1395), as well as the Scala Coeli near Genoa (1406). Throughout the fifteenth and sixteenth centuries, manuscript copies of Revelaciones were circulating in numerous courts and republics up and down the Italian peninsula.

Fifteenth-century Florence will play an important role in the project as a cultural centre and locus for manuscript production, as well as a city in which a prominent woman writer authored numerous spiritual works. Lucrezia Tornabuoni (1427–1482), widow to Piero de’ Cosimo de’ Medici and the mother of Lorenzo il Magnifico, was an important influence on matters civic and religious in Florence, and was highly entrenched in the operations of a number of convents and civic charities. She was also the author of numerous sacred representations, including stories on the biblical heroines Judith and Esther.

Further to the circulation of Latin manuscripts, two Italian vernacular translations of Birgitta’s Revelaciones were produced in 1494 and 1495 at the Paradiso convent. The project intends to explore how these translations were connected to contemporary historical events in Florence: The manuscripts were completed at a moment when Birgitta’s message of reform would have been especially appealing in the Tuscan city, as the Medici were ousted from power, Charles VIII invaded Italy, and the preacher Savonarola, who himself claimed prophetic visions, ruled over the city of Florence from 1494–1498.

Thirty years later, the publication of Birgitta’s corpus coincided with another reform movement: In the early years of the Italian Reformation, Revelaciones would be published as Prophetia di Sancta Brigida by the Florentine printer Francesco di Giovanni Benvenuto in 1529, just before the catastrophic Siege of Florence. How were Birgitta’s prophesies perceived during these dramatic incidents?