Mapping Birgitta’s network in Italy is crucial in order to understand the future impact of her Revelaciones. The Revelaciones may be regarded as the starting point for the extraordinary surge of women writers in Italy in the Renaissance 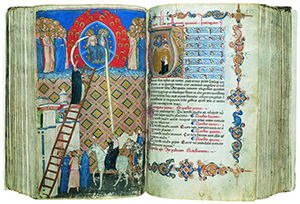 With the exception of her frequent trips around Italy, her journey to Cyprus and even to Jerusalem, Rome became Birgitta’s main residence after 1350, and during the last twenty-three years of her life. In Italy, her revelations were gathered into a coherent corpus, and she herself oversaw their translation into Latin. Mapping Birgitta’s network in Italy is important to understand the future impact of her Revelaciones. The Revelaciones may be regarded as the starting point for the extraordinary surge of women writers in Italy in the Renaissance. Indeed, the collection of her writings represents one of the most extensive literary oeuvres produced by any woman in medieval or early modern Europe, and unquestionably the largest in or prior to her day. Further to her literary work, her political agency is also unique. No one fought with more fervour and constancy than she did for the return of the papacy to Rome from its long exile in Avignon in Southern France, for the reform of the Church, and for the restoration of Rome as the institutional centre of Christianity. Moreover, Birgitta is the only woman to have founded a monastic order of her own devising, and the only woman from the fourteenth century, and one of the few laywomen of the later medieval and early modern periods in general, to become formally canonized. These factors – her vast authorship, her clear political voice, and her extraordinary ecclesiastic role – furnished Birgitta with a rare authority which came to form her legacy in the Italian Renaissance.

A tendency within modern scholarship has been to study Birgitta solely within the tradition of holy women in late medieval culture. As such she has been more or less excluded from accounts of European intellectual history, the development of Italian humanism, and the surge of women writers in the Renaissance. The aim of the first subproject is to restore Birgitta’s role in fourteenth century culture, and her central position both in Italy and in Rome. Her Revelaciones reveals an extraordinary social network of correspondents – knights and friars, popes and cardinals, and Italian noble families such as the Visconti in Milan, the Colonna in Rome, Queen Joanna I of Naples, and Queen Eleanor of Aragon in Cyprus. This network places her at the centre of the urban and courtly contexts emerging at the threshold of the Italian Renaissance. Likewise, the notions that occupied her, such as the secular power of the Church, the reformation of the clergy, the bloody wars among the Italian city-states, the providential role of the Virgin Mary, and the suffering of Christ, clearly connects her to future generations of reformers in the fifteenth and sixteenth century.