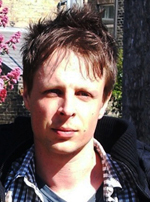 Project on the Scientification of Religion in the 19th and 20th century in Cooperation with the University of Basel.

The Aesthetics of Religion Network: AESToR.net