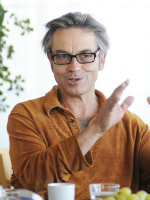 My main disciplinary background is in Islamic and Arabic studies, combining both philological, historical, and social-anthropological approaches. I have also been influenced by my studies in German literature and linguistics, comparative religion, and Persian language.

My academic research remains indebted to field experience gained while working in humanitarian and development cooperation with the International Committee of the Red Cross (ICRC), the UN, and the German Development Service in the Sudan, the Palestinian territories, and Yemen.

My work is embedded in several research networks at the Department of Culture Studies and Oriental Languages, including GreenMENA: Climate Change and Energy Transition in the Middle East, In 2016: How it felt to live in the Arab World five years after the ‘Arab Spring’, and the New Middle East Project (NewME).

For more detail, see my publications at Google Scholar, Academia and ResearchGate.

I teach graduate and undergraduate courses in Arabic and Middle Eastern studies. Apart from participation in language training at all levels, this includes:

Since joining the University of Oslo, I have regularly supervised master students as well as five doctoral candidates.

I received my academic training at universities in Bonn, Tunis, Cairo, and Berlin, where I engaged in Islamic, Arabic and Persian studies, Islamic art history, Arabic music, comparative religion, German literature and linguistics. In 1996, I obtained the degree of dr.philos. in history from the University of Bergen with a dissertation on the social and religious history of an Islamic reform movement in the early modern Sudan. The dissertation was selected as one of that year’s best by the Middle East Studies Association of North America (Malcolm H. Kerr Award).

My academic life was enriched by field experience gained while working in humanitarian and development cooperation with the International Committee of the Red Cross (ICRC), the UN, and the German Development Service in the Sudan, Uganda, the Palestinian territories, and Yemen. My main tasks there included assistance to prisoners of war and other persons arrested in relation to conflict, to refugees, internally displaced, and other civilians affected by violent conflicts, evaluation of cooperation programmes, and consultancy in matters of good governance.

After returning to academia, I became a fellow of the Institute for Advanced Study and the Centre for Modern Oriental Studies i Berlin before joining the University of Oslo in 2004.