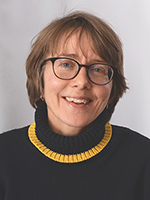 I have pluridisciplinary background with specialization in Religious History, Islamic Studies and Comparative Literature. My research focuses on different aspects of religious- and cultural encounters between Muslims and Christians, spanning from conversions and mixed marriages in medieval Iberia, via the Hammam as a cite of cultural encounters in 19th century travel writing, to literary descriptions of immigrant workers in Paris. Currently, I participate in three research projects: Tracing the Jerusalem Code: Christian Cultures in Scandinavia where I analyze 19th century Scandinavian descriptions of the Holy Land; Mobile Musilms and Invisible Islam where I explore fiction as a source for studying Islam in Europe; and Value Politics (ValPol) where I have worked on divergent value discourses that shape the Tunisian political landscape after 2011.

I joined the Department of Culture Studies and Oriental Languages as Associate Professor in August 2013.

From 2011-2013, I was a Postdoctoral Research Fellow at the Department of Literature, Area Studies and European Languages at the University of Oslo. The period included a one year research stay in Tunisia.