Are the terms alcohol and kohl related? Yes, if we trace their origins. An Arabic etymological term base, the first of its kind, can provide new knowledge about Arab identity and cultural history.

Arabic is one of the world’s most widely spoken languages, with an estimated 250 to 300 million native speakers. Despite this fact, there is still no Arabic etymological dictionary. However, the dictionary is on its way. Stephan Guth, Professor of Arabic at the University of Oslo, has taken the initiative to pursue this research project.

“There has been a lot of etymological research, but it has not been collected anywhere,” the professor explains.

The plan is to establish an electronic database, EtymArab. In an upstart phase, the website will be based on words and concepts from Modern Standard Arabic (MSA) only, but these are also chosen to shed light on roots and concepts that have a special importance in Arab intellectual and cultural history, from ancient times until the present day.

“The history of their language helps us understand who the Arabs are – and were,” Guth says. He points out that the database will also present the narratives that emerge when a word is traced back in time. As such, EtymArab will be more than a standard etymological dictionary.

Words unlock the doors to history

“Alcohol is a word that you will not find in dictionaries of Classical Arabic. In the final analysis, however, this word is of Arabic origin. It is derived from the Arabic al-kuḥl, which means ‘kohl’. When the Europeans became familiar with this substance in Andalusia, which was also used for medical purposes, they referred to it and gradually all other fine powders, and subsequently all kinds of volatile essences, as alcohol. In Catalan, kohl is still called alcofoll.

In the meaning “essence of wine, spirit”, the word later returned to the Arabs and became al-kuḥūl, Guth explains.

“Today, we thus have two Arabic words: The one that started this development, i.e. al-kuḥl, which still means ‘kohl’, and the loan word al-kuḥūl, which means ‘alcohol’.

“When a word is opened, several doors to history are unlocked,” Guth points out. Kohl (kuḥl) turns out to have been a commodity which was widely used in the Orient, and it was probably already known in Ancient Egypt and Mesopotamia.

“’Almost each time I go to the root of a word, I discover new nuances, new narratives,” the professor says.

The first step: a thousand-word prototype

The research project, launched in 2012, builds upon the many studies undertaken so far in the West and in Arab countries.

“It’s a comprehensive work we have ahead of us. As for myself, I do not expect to see the database completed,” Guth says.

The first step is a prototype that will contain approximately 1,000 words and concepts. 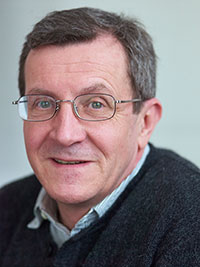 Stephan Guth, Professor of Arabic at the Department of Culture Studies and Oriental Languages, University of Oslo, is directing a research project aimed at establishing an Arabic etymological dictionary, the first of its kind. (Photo: Annica Thomsson)

“Everything will need quality assurance, of course. This is a major challenge. We need expertise from a number of other disciplines to interpret our findings correctly. For example philosophy, theology and medicine, as well as all the major philologies of the Ancient Orient, in particular Semitic languages such as Akkadian, Aramaic, Hebrew, Ethiopic and  Old South Arabian. But also all stages of Persian. Gradually, we wish to open the database to the entire world, according to the Wikipedia model.”

Etymology is a sensitive issue

“Why a European project, and not an Arabic one?”

“The fact that the Arabs themselves have not produced an etymological dictionary so far is probably due to the sacred status of the Arabic language. A historic approach, such as ours, is more common in the European tradition than in the Arabic one,” Guth explains. He has previously lived in Arabic-speaking countries, in Cairo and Beirut.

“Arabs tend to be hesitant about cooperating with the West with regard to projects that touch upon Arab and Muslim identity. Etymology, like archaeology, can be a very sensitive area. It was not always like this, however. Until the mid-20th century such cooperation was far more relaxed. Matters were later complicated by the establishment of the state of Israel, the Palestine refugee tragedy, and other traumatic experiences such as the invasion of Lebanon in 1982 and the Gulf Wars.”

He adds, however, that attitudes to the West have changed somewhat in recent years.

“We now have contact with scholars in Qatar. A group of Arab researchers have embarked on a promising project, a dictionary that addresses Arabic language history.”

Even the Koran is full of loanwords

“Many Arabs claim that Arabic is essentially a pure language,” Professor Guth points out.

“As a result of the anticolonial national movement, several purist language academies emerged, striving to keep the language ‘pure’.”

According to etymological research, however, Arabic has always been a linguistic cocktail.

“But Arabic is also a conservative language. Loanwords tend to be Arabized,” he says, using the word ‘train’ as an example.

“The Arabs became familiar with trains as a means of transport in the 19th century. But instead of adopting the French or English word ‘train’, as the Turks did, they chose an old Arabic word instead: qiṭār, which until then had been used to describe a train of camels.”

Throughout various historical epochs, Arabic has been influenced by several other languages.

“Even though most Arabic words look ‘purely Arabic’, many of them are loanwords, which points to the fact that there has always been close contact between the cultures. Even the Koran is full of loanwords, most of which originate from Syrian-Aramaic and Hebrew. This is a result of the presence of Christian and Jewish groups in Arabia at the time.”

“Islamic theology and other sciences would look much different, or perhaps would not exist at all, had the Arabs not absorbed the Hellenist legacy,” Guth points out.

“The culture of the Arab royal courts during the ‘Golden Age’ is basically Persian royal court culture.”

The culture and history of the Arabs are hidden in their words.

“That’s why this research project is important. That’s why it is essential to put in place an etymological dictionary such as this one. It may provide answers to questions such as: Who are the Arabs today? Who were the Arabs before the birth of Islam?

Etymology is the study of the history of words, their origins, and how their form and meaning have changed over time.