In China, where everyone uses WeChat to book taxis and chat with friends, doctors can diagnose with advice from across the globe. Meanwhile, the Communist Party is watching. 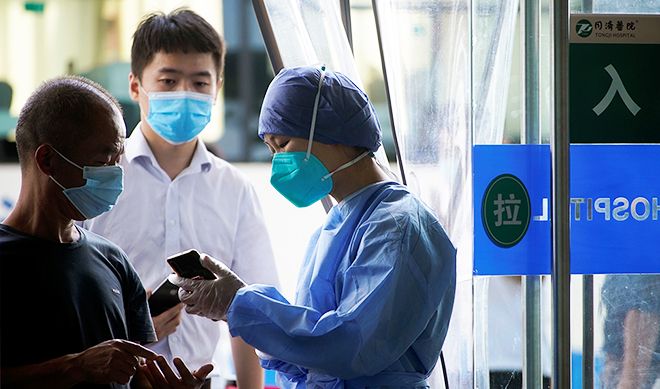 A nurse in Wuhan, China uses a smart phone for work. Health professionals in China have embraced the WeChat app to communicate with colleagues on the other side of town, or the globe.

What you do with a number of different apps on your smartphone, the Chinese do with one app: WeChat.

“Without WeChat, you cannot function in China, neither socially nor practically. You do everything in the app,” says Lai Sze Tso, who has studied how the omnipresent app is being used by health care professionals in the country.

In the same way that many colleagues create groups in Teams, or are part of long group chats on Messenger, health professionals in China have embraced WeChat for work purposes.

“It has made the exchange of the latest in medical expertise available across both institutional and geographical borders, and has beyond doubt improved health care for Chinese patients,” says the researcher.

There are big differences between hospitals in China. Some large hospitals can have expensive equipment and highly trained specialists. Elsewhere, in rural areas or in hospitals with few resources, providing patients with timely treatment may be more challenging.

“During my fieldwork in China, many health professionals told me that even though they lacked resources in their own workplace, they had colleagues at a well-equipped hospital, or working at a research center abroad, where they had access to the state-of-the-art medical technologies,” says Tso.

When a nurse or a doctor is facing a patient with a complicated illness, they can resort to WeChat groups to reach colleagues on the other side of town, or the globe, to help them make a complex diagnosis.

“This way, a technology that is used for everything, by everyone, has vastly improved the quality of health services in China,” Tso emphasizes.

The professional networks Lai Sze Tso has studied often involve 20-30 colleagues, or as many as 200 across hospitals and regional borders.

“This is not necessarily where they first establish contact. It is common to invite someone you have met at a conference, or someone vouched for by your colleague. Once the relationship is established, you can ask for help and share information.”

If a doctor shares an image of a skin disease, explains what she has tried so far and asks for advice, other doctors can see review the image to compare diagnoses in their databases, suggest possible treatments, or refer articles or experts to improve the service given to the patient.

“Health professionals who are not physically present in China make important contributions to the groups. From abroad, they share resources, such as books and articles, or the latest scientific knowledge about procedures, diagnoses or guidelines.”

According to Tso, this is a strategy that overcomes some of the enormous inequalities between poor and rich settings and across countries.

“Much of the information could have been publicly available but is behind paywalls or has not been vetted by the health authorities in China yet.”

Doctor alerted about COVID-19 on WeChat

Lai Sze Tso's research is part of the BROKEX project, where researchers at UiO investigate which arenas China uses to establish and maintain international contacts.

Heidi Østbø Haugen, professor of China Studies, is head of the research project. The fact that WeChat has made it possible to provide better health care comes at a cost, she explains.

“Information is transferred on an unsecured platform, where the authorities have access to everything you share, even if the groups are private. This can have serious consequences.”

When a new and SARS-like virus appeared in Wuhan in December 2019, Doctor Li Wenliang alerted colleagues on WeChat.

“This happened in a private group of close colleagues and was not intended for the public. Still, he got into trouble. He was taken to the police station and had to sign a statement that he would not create more trouble or spread false rumors,” says Østbø Haugen.

When the doctor later died of COVID-19, many Chinese reacted strongly. The authorities have also been criticized for removing information about the virus from WeChat. According to Østbø Haugen, the fact that what you share can get you into trouble has the effect of a panoptic prison, as described by the French philosopher Michel Foucault.

“You’re not necessarily observed all the time, but the possibility is there, so you adapt,” she says.

Lai Sze Tso points out that WeChat has nevertheless been useful during the COVID-19 outbreak, precisely because the exchange of information is so rapid.

“At the beginning of the outbreak, I know people asked each other for updates. They shared information about when to use face masks and how the virus behaved,” she says.

Because WeChat is used by Chinese all over the world, the app was also vital in sharing information about COVID-19 across national borders.

“Many Chinese living abroad, for example in Italy, did not understand how to navigate information and get access to medical help, and the doctors there did not really understand what was going on. WeChat groups were established to connect Chinese in Italy with doctors in southern China, so that they received health information from doctors at home.”

In Norway, patient privacy is highly valued, and when patient information goes astray, it is considered a scandal. The same privacy rules are not directly applicable in China, but that does not mean there is a free flow of sensitive information, Lai Sze Tso emphasizes.

“That the understanding of patient protection and what counts as patient privacy is different than in Norway, for example, is sometimes reflected in the way WeChat communication takes place. But doctors are aware that patient information is confidential, so they do not post it in an open group.”

In closed groups, however, anonymized patient histories including information about sensitive issues like sexually transmitted diseases can circulate.

When signing up for WeChat, the account is linked to your identity documents and your bank account. Because you use the app for activity both on- and offline, it gathers information about where you are and what you do. You probably use WeChat to schedule appointments, so it also knows who you meet.

“You agree to letting the government access this information when you register. In many ways, it works like with Facebook and Google, who also collect an incredible amount of information about you if you use their services,” says Heidi Østbø Haugen.

The difference is that you cannot do without WeChat in China. China's Communist Party is also known for censorship, and much information is removed from WeChat.

“WeChat sends you suggestions from friends and algorithm based news feeds just like Facebook and Twitter. However, WeChat removes content from news feeds and even private messages to a much greater extent than Western platform. Unwanted information is quickly suppressed, including politically sensitive messages labelled 'malicious rumors',” Østbø Haugen continues.

China connects with the world

China looks to the world, and the world looks to China. The fact that Chinese doctors connect with colleagues in the USA or Japan to get up-to-date expertise is a concrete example of how the interaction between China and the rest of the world takes place.

“When they lack the financial resources to subscribe to important medical journals, or the language skills to read articles in English, the WeChat groups act as an intermediary,” says Tso.

This knowledge is important for anyone who wants to establish themselves in China, she points out.

“Many medical companies, but also community leaders  and public health administrators, want to establish relationships with and in China. What many people do not know is that they need WeChat to do so.”

The objective of BROKEX is to fill specific gaps in knowledge about how China’s extraversion advances. Professor Heidi Østbø Haugen is the Principal Investigator.

Lai Sze Tso is a Postdoctoral fellow at the Department of Culture Studies and Oriental Languages (IKOS). She holds a Phd in Sociology and Women's Studies from the University of Michigan, and her research interests are health and medicine, technology and international development.