New research explains why the Kurds in Syria and Hamas in Gaza have stayed in power, while ISIS lost their legitimacy and rule in Iraq. 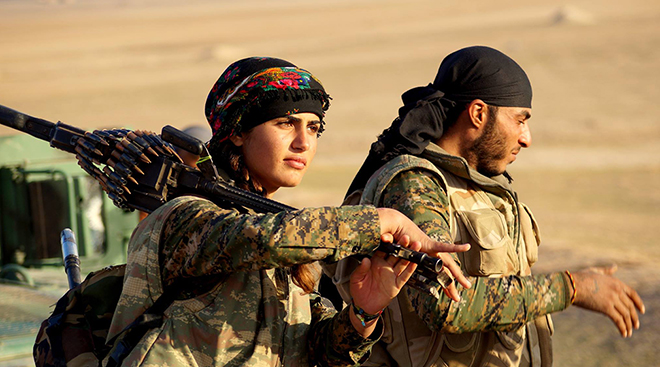 Women have been integrated as soldiers into the YPG – the People’s Protection Units, fighting against IS in Syria.

Since the 2010s, ISIS soldiers have swept into the Arab world brandishing Sharia law in one hand and a Kalashnikov in the other. The vision of establishing a large and long-lasting Islamic regime did not succeed in either Iraq or Syria, and the jihadists were chased from most areas during 2017. According to results from a research project conducted at the University of Oslo, the failure of ISIS to hold on to power relates to the traditional mechanisms of legitimacy and security in the Middle East.

“The relationship with local kinship groups determines the success of rebel governance in the Middle East. There are big differences between the global jihadist groups and the areas controlled by national rebels, such as in Gaza in Palestine and Rojava in Syria,” says Dag Tuastad, senior lecturer in Middle East studies at the University of Oslo.

Together with his research colleagues Brynjar Lia, Pinar Tank and Erling Lorentzen Sogge in the project Rebel Governance, he has studied the link between rebel rule and kinship groups in three areas of the Middle East: ISIS-controlled areas in Iraq, Kurdish-controlled areas in Syria and Hamas-controlled Gaza.

Islamic State (IS/ISIS): An Iraqi jihadist group that has been fighting for the foundation of a separate Islamic  state in the Levant. Established in 2013.

Fatah: The largest of the member organisations that make up the Palestinian Liberation Organization (PLO). Founded by Yasir Arafat et al.in 1958.

Rojava: The Kurdish-dominated parts of northern Syria, also referred to as West Kurdistan. Not a separate state, but declared as an autonomous region in 2013. Governed by the Kurdish Supreme Committee. The military forces called the People’s Protection Units (YPG) and the Women’s Protection Units (YPJ) are important in the fight against IS in Rojava and the rest Syria.

The areas the researchers are studying have one particular thing in common: A weak state. However, just because a weak state can allow rebel groups to take power does not mean that society is not already organised.

“The alternative to the state is that tribal groups control the areas,” says Dag Tuastad.

The word ‘tribe’ is a common term for extended family groups, which may include 30 to 40 members, but also up to 10,000 in Gaza, or 3 million in Iraq. In Palestine, the traditional tribal groups are called Bedouins.

“Tribal groups do not necessarily have services that can replace a state, such as health or education. However, they tend to provide security for their members and administer traditional law. This becomes very important in areas without a state because local populations have great confidence in it,” says Tuastad.

Hamas and YPG are less brutal than ISIS

Understanding how the kinship groups are organised and which tribes hold power is crucial to whether a rebel group succeeds in its project. According to Tuastad, violence alone is not the path to legitimacy.

“ISIS has, in the same manner as al-Qaeda, been very brutal. Their project is global and ideological, and they have viewed local kinship groups as being less religious and as competitors,” he says.

“While Hamas, who has governed Gaza since 2007, and the Kurdish forces that established Rojava after the war in Syria, are more pragmatic in their approaches. That may explain why they have been successful in holding on to the areas over longer periods of time.”

When ISIS first arrived in Iraq in 2013, the people  supported them. There was great dissatisfaction with the Shia-dominated government that was established after the US-led invasion in 2003. ISIS also provided engineers to secure access to water and other necessary services. This earned them support among tribal groups.

“However, they lost their legitimacy when they began to employ harsh punishments.”

ISIS gained a particular foothold in the major cities, where tribal groups are not so well organised. Tuastad points out that dissatisfaction quickly began to spread throughout rural areas and in the cities, and that IS had only secured power through their violent behaviour.

“There was no alternative military force in the cities that could threaten them. And just as al-Qaeda did in 2005-2006, they massacred the tribal groups that opposed them.

Kinship groups hold great importance and a lot of power in many areas of the Middle East. Nevertheless, the arrival of outsiders affecting a region’s balance of power may be welcomed.

“Historically, there are oppositions between the young and the elderly. Young people want more influence, and may feel that the older men are outdated. This is what rebel forces can offer.”

“Divide and conquer is also a well-known strategy. When several kinship groups live in one area, a hierarchy of power exists between them. If a group such as IS or al-Qaeda arrives and allies itself with the second largest tribe, they change the dynamics and the balance of power.”

The researchers have looked at several similarities and differences between the global jihadist groups and the national rebel governments. The relationship between women and men is important, but in very different ways.

“It is interesting to see how women become trophies for the different ideological projects,” says Tuastad.

In the ISIS-controlled areas, the group introduced strict gender segregation.

“An important part of their propaganda was to introduce Sharia law. Organising the relationship between the sexes in a respectable manner became a symbol that one knows the Quran. Therefore, for example, men and women working together in the fields was no longer permitted.”

In the Kurdish Liberation Movement, however, the equality of women has been an important element, and women have been integrated into Kurdish security forces and as soldiers of the YPG – the People’s Protection Units. The female soldiers of Rojava, known as the YPJ - the Women’s Protection Units, have become something like feminist symbols in the West. It attracts attention when women in the Middle East play an active role, and according to Tuastad, YPJ represents a paradox.

“There have been strong tribal groups that are very patriarchal. At the same time, Abdullah Öcalan, the now imprisoned founder of the Kurdistan Workers’ Party PKK, has promoted a strong ideology of equality. He is the hero among the patriarchal groups, which shows that the view on gender is a complex one.“

To investigate the views on security and the justice sector, the researchers have, among other things, conducted a representative survey in Palestine. Here, it became apparent how important traditional law is to people.

“Without compare, the Bedouin houses are the actors people have most confidence in,” says Tuastad.

The Palestinian legal system is perceived as being ineffective, and most people turn to Bedouin judges for help. The most important thing is to achieve social harmony through reconciliation, and the Bedouin judges are able to resolve cases including everything from disputes between neighbours regarding a fence or a traffic accident, to murder or bitter settlements after the conflict between Hamas and Fatah.

“The principle of traditional law is that when someone in one kinship group is in conflict with someone from another, there is a collective responsibility. Together with the Bedouin judges, respected members of the families participate in negotiations, and solutions regarding the question of guilt and compensation are found,” explains Tuastad.

Although attempts have been made to build a Palestinian rule of law over time, Hamas has not chosen to replace the traditional system, but rather incorporated it into its way of governing.

The family trumps everything

The political situation is different in the areas the researchers have focused on. Gaza has been characterised by polarisation since Hamas drove Fatah out in 2007.

“No conciliatory development has been achieved, and the political divide is deep and pervasive. Family becomes a mechanism for operating across political divides, where brothers may stand on opposite sides.”

Although politicians have attempted to use the families for political means, as Yasir Arafat did when he gave families different roles in the security apparatus, Tuastad believes the loyalty to one’s own family will always trump that to political leaders. It applies whether it is in Gaza, Iraq or Kurdistan.

“Family means security. Political groups come and go, but the families remain and provide a foundation of assurance. When there is armed conflict and uncertainty, their role will immediately become more important.”

Tuastad believes that if the political situation changes and governance in the areas becomes more stable, tribal groups are unlikely to lose their position.

“It is also about values, about appreciating relatives more than non-relatives. The social and cultural aspect will be able to continue, even if the political need for kinship groups dissappears.”

Rebel Governance in the Middle East (RebelGov) is a research project at the Department of Culture Studies and Oriental Languages (IKOS) at the University of Oslo. The project investigates sociopolitical organisation in rebel-controlled areas of the Middle East, and focuses specifically on the relationship between rebel groups and existing local kinship groups. The project is led by Dag Tuastad. Researchers involved in the project are Brynjar Lia, Pinar Tank, Erling Lorentzen Sogge and Anne Likuski.