Distrust of the state in Turkey, religion and abortion resistance in the United States. Politics and culture are just as important in explaining vaccine hesitancy as health. 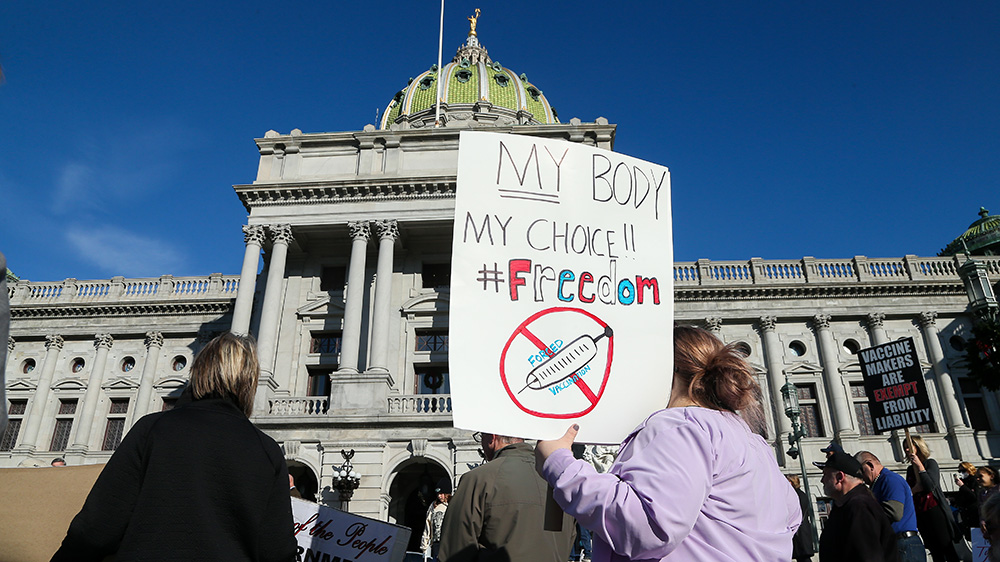 Americans protesting the coronavirus vaccine in Harrisburg, Pennsylvania, December 2021. When the vaccine was launched, resistance became almost emblematic of certain communities which were generally very sceptical of the political elite.

“Whatever they say, I do the opposite. If they tell me to wear a mask, I won't wear a mask. And I'm not going to have the vaccine.”

This quote comes from Ercan. He is a pharmacist and a homeopath living in Istanbul, and one of many Turks who do not want to be vaccinated against COVID-19.

“In Turkey, many people use the vaccine issue as an opportunity to push back against the power of the state,” says Einar Wigen, associate professor of Turkish studies at the University of Oslo.

Together with Nalan Azak, PhD student in Middle East studies, he has looked at the meaning people attach to vaccines, both historically and in the face of the new coronavirus vaccine.

According to Wigen, this is crucial knowledge in combating infectious diseases.

“It is not enough ‘just’ to develop a vaccine, one must also understand its cultural and political significance in society,” he points out.

Vaccine compulsion over trust in the state

In the Nordic countries, a high level of trust between the general population and public authorities is often highlighted as the most important tool in the fight against the coronavirus pandemic. In Turkey, on the other hand, there is far less trust between citizens and the state, and the country's authoritarian President Recep Tayyip Erdoğan is known for his extensive use of power against his opponents.

Today, all vaccinations are voluntary in Turkey. However, vaccination compulsion has been an effective tool in Turkish public health policy long before Erdoğan came to power.

“Turkey has some of the highest vaccination rates in the world amongst children, but some of the lowest for vaccination against influenza amongst the elderly. This can be explained by the fact that the WHO's childhood immunisation programme has been compulsory, while the influenza vaccine has been voluntary,” says Wigen.

He points to a long history of compulsory vaccination. From 1884 onwards, vaccination was compulsory in order to attend school, and in 1930 it became mandatory for everyone living or staying in Turkey, regardless of their citizenship.

“The success of coercion has resulted in other tools being disregarded, such as the building of trust or getting people to realise that vaccines are good for them.”

Not just the individual's choice

Wigen believes that people may also feel pressured into having the coronavirus vaccine.

“Although taking the vaccine is entirely voluntary, there are many factors in society which are making people feel compelled to take it.”

As of December 2021, just under 60 percent of Turkey's population were vaccinated against COVID-19. Wigen refers to an interview during which an employee of a major Turkish oil company said that unvaccinated people are being threatened with losing their jobs.

“Now, I don't know if they are actually being fired, but it says something about there being more ways to encourage people than through compulsion by the state. For example, some people have assumed that they are not allowed to travel unless they are vaccinated.”

Wigen believes that resistance to vaccines in Turkey cannot be explained by individualism.

“I haven't seen any studies of this recently, but the Turks have tended to score highly on collective thinking. This does not necessarily translate into trust in the state, however, because it is not the state that is seen as the collective.”

Turning point for vaccination in 2015

Even though Erdoğan has disregarded many of the Turks' rights, it was the constitutional human rights that led to compulsory vaccination being abolished.

In 2015, two parents who did not want their children to receive the compulsory childhood vaccinations ended up in court. Turkey's Supreme Court ruled that it was in violation of the constitution to order someone to be vaccinated.

Since then, the number of families exempting children from the immunisation program has risen sharply. In 2018, this figure was around 13,000.

The parents argued that the vaccines contain harmful substances which can cause autism, amongst other things. This is a widely used argument, which originates with former academic and discredited doctor Andrew Wakefield, who in 1998 published a hugely criticised study on the link between the vaccine against measles, mumps and rubella (MMR) and autism.

“Information and misinformation about the possible side effects of the vaccines has spread through many communities and channels, particularly since 2015. It appears that more and more people are picking up these arguments from the outside, and in that sense this is part of a wider international picture.”

Wigen sees more and also overlapping justifications for vaccine scepticism in Turkey. Some people link resistance to vaccines to what is known as ‘prophetic medicine’.

“This is a culturally specific form of alternative medicine, where various ‘old wives’ tales’ are linked to examples from Hadith. The Prophet Muhammad is used as an example to follow and emphasis is on prayer and fasting, not to mention nuts, dates and honey: in other words, diet and lifestyle over pharmaceutical medicines.”

Nationalism is also influencing the prevailing view of vaccines in Turkey.

Various coronavirus vaccines are being offered, and President Erdoğan has specifically encouraged the population to take the vaccine developed by Turkey itself, which he refers to as the ‘traditional’ vaccine. The Turkish vaccine Turkovac differs from the Pfizer, BioNTech and Moderna vaccines, which are based on new mRNA technology, and is closer to the AstraZeneca vaccine, for example.

“The type of vaccine that vaccine opponents have always opposed suddenly becomes the ‘traditional’ and established vaccine when a newer technology arrives on the scene, and it is portrayed as safer because it is produced locally,” says Wigen.

Religious vaccine exemption in the USA

Hanne Amanda Trangerud researches religiously based vaccine scepticism in the USA. Here, childhood vaccines are compulsory before starting kindergarten and school, and the vast majority of people opt to have their children vaccinated. The fight against vaccine compulsion is led by a number of groups with strong leaders, and scepticism is more prevalent amongst certain religious communities including Amish and ultra-Orthodox Jews, than in the rest of the population.

She has found that many people in the USA perceive compulsory vaccination as an abuse of power and overstepping on the part of the authorities. However, this is just one of many arguments that are put forward.

“As many US states allow religious exemptions from compulsory vaccination, the religious aspect of vaccination becomes more visible than in a country like Norway, where no justification for not being vaccinated is needed,” says Trangerud.

According to Trangerud, a fairly common argument in the USA, which is relatively unknown in Norway, is resistance to vaccines because they can be linked to abortion.

“This applies to certain viral vector vaccines, and the issue was also in the news in connection with Johnson & Johnson's coronavirus vaccine. They are considered to be ‘unethical’ because the production process involves cell lines from aborted foetuses. These opponents are not necessarily opposed to vaccines in general, only these particular ones.”

However, Trangerud points out that explaining why certain groups or individuals oppose vaccination can be a complex task. The reasons may be medical, as well as psychological, religious, cultural or financial. As regards the COVID-19 vaccine, it came at a particular moment in American politics.

“Scepticism towards the COVID-19 vaccine has been greater than that towards childhood vaccines. As it coincided with Donald Trump's defeat in the 2020 election and a transition to a more liberal president, vaccine resistance became very politicised,” she says.

Trangerud explains that the protests first began as opposition both to the requirement imposed by the authorities to wear a mask, and to the lockdown generally, which also came from churches and religious institutions – something many of Trump's conservative Christian supporters interpreted as a targeted attack on religious freedoms and the direct persecution of Christians.

“When the vaccine was launched, resistance became almost emblematic of certain communities which were generally very sceptical of the political elite. This has also brought vaccine opponents and certain evangelical Christian communities together, with the result that both have gained more support.”

Resistance through control over one's own body

Hanne Amanda Trangerud agrees with Einar Wigen that it is important to take account of the cultural context for combating diseases using vaccines.

“Measures must be tailored to groups and individuals locally. This is shown by the resistance to the coronavirus vaccine we are now seeing in the USA. Given the complex controversy linked to Donald Trump and certain theological traditions, Biden's vaccine laws are actually a pretty bad idea which could do more harm than good,” she says.

Wigen believes that some of the opposition should not simply be dismissed, and that it can also be interpreted as healthy scepticism.

“Many Turks, along with many Americans and other nationalities, often believe that the state does not act in their best interests at all. This distrust spills over to the vaccine issue, because a kind of defiance emerges when certain areas of society oppose the idea that everything that the state says is good.”

He points out that the vaccine issue confirms one of the most fundamental points made by the French philosopher Michel Foucault: Where there is power, there is resistance.

“This is therefore the resistance, not just to the vaccination policy itself, but also to government intervention more generally,” he concludes.

Einar Wigen is associate professor of Turkish studies at the University of Oslo and heads the research project entitled “The Lifetimes of Epidemics in Europe and the Middle East”. Nalan Azak is a PhD student working on the project. The research that is presented is based on textual studies and Azak's field work in Turkey.

Hanne Amanda Trangerud is a PhD student in religious studies at the University of Oslo. She is working on her PhD project entitled “To Use or Refuse”? Understanding the Rationale behind Religious Scepticism towards Vaccines in the United States.