Animals as Objects and Animals as Signs (completed)

This study of standardisation and visualization of animals examined aesthetic transformations of animals, mammals and birds into objects and signs. 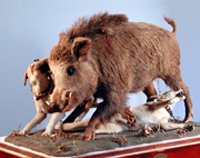 Using the history of culture and science as point of departure, the aim was to analyse how forms of knowledge and knowing are also influenced by cultural ideas, norms and values which take their rationales from art as well as from everyday life.

By analysing empirical material taken from natural history museums and literature, as well as from everyday life, the project wanted to:

By using aestheticization of animals as path to demonstrating connecting lines between nature and culture that have for the most part been ignored in research, the project seeked to promote dialogue between the natural science subjects and cultural subjects.

The aim of the project was to examine relations between nature, culture and aesthetics. Through five subprojects aestheticization in fields where it is not expected to be found was examined, looking for moral, ethical and political conflicts that are inherent or triggered by such aesthetic trans­formations.

Animal Biographies. On the Unnatural History of Animals

The project examined a selection of stuffed animals in Gothenburg Natural HIstory Museum and analyzed them as, respectively, natural history illustrations, cultural representations and actors with a biography.

Human fascination for animals and celebrity has a long history. In my project, I looked at cases where the two are combined: what happens when the fascination for one animal becomes so strong that it is turned into a media celebrity?

Making the Insect World: The Science and Fiction of Entomology

This project examined the cooperation of rhetorical worldmaking and anthropomorphism in the historical portrayal of insects in Western society.

These are some of the questions addressed in the monograph.

The Poetics of the Natural History Museum Around 1900

This project analyzed debates, conflicts and negotiations related to architecture and exhibition in Norwegian natural history museums during the decades around 1900. In addition to the international discourse on museum buildings, exhibition and collection technology was included, particularly paying attention to how the Norwegian museums approach this discourse.

Under the Skin: the inner body language

This project will studied aestheticizations of the inner landscape of the body through different literary and visual presentations that may be related to the vital force debate.

The project received financial support from the Norwegian Research Council.

Conference in cooperation with KULTRANS