Hazmat suits, giant ants, and typhoons. Or: the hazards of doing anthropological research in 2020

Getting access to the field is not easy this year. But Whales of Power PhD candidate Anh Tuan Nguyen has finally made it to Da Nang, Vietnam, where he will spend the next nine months doing ethnographic research. An account of his adventures. 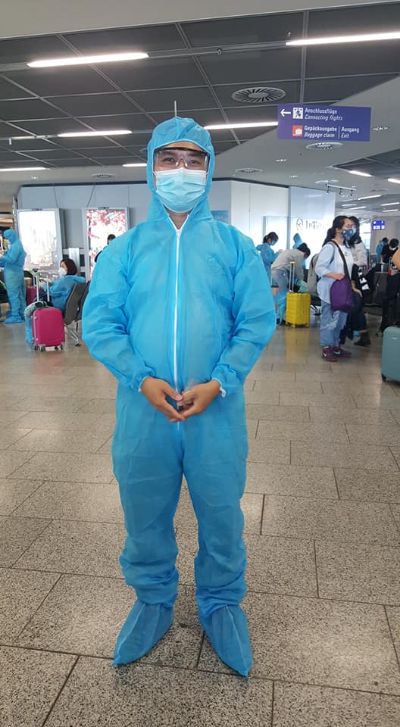 I started my PhD project in September 2019. My initial plan was to travel back from Oslo to Vietnam in mid-April 2020, in order to conduct my fieldwork research on whale worship in the coastal area of central Vietnam. However, the Covid-19 pandemic seriously affected my research plans. Vietnam closed its borders in April 2020, and no international commercial flight has been allowed to land in the country since. As a result, I had to wait for five months in Oslo before getting a seat on a repatriation flight to Vietnam for conducting my fieldwork research. During this time I got much help from the Whales of Power research team, the Department of Culture Studies and Oriental Languages, and the Vietnamese Embassy in Norway. Eventually, I was approved to travel back to the country on 16 September 2020 with a “rescue flight” ticket from Frankfurt to Hanoi.

Frankly, I was a bit nervous about travelling back to my home country during the Covid-19 pandemic, particularly as there had recently been a new outbreak at my research site, Da Nang city. The journey from Frankfurt to Hanoi was quite an experience. Although I came to the airport early, four hours before the boarding time of my flight, I was in the middle of an extremely long queue of 343 passengers. We must have looked abnormal in the eyes of other passengers, because we all donned blue hazmat suits, covered our hair, and were wearing goggles, masks, and plastic face shields. We looked as if we were about to go into a laboratory to conduct chemical research! On the plane, we were packed like sardines, which was quite nerve-wracking. Most of us did not talk to others, so the flight was almost completely silent. I tried to fall asleep, but I did not manage. I was uncertain about what would happen upon arrival as I had not received information about the place where I would be quarantined for two weeks. I was not the only one who couldn’t sleep: even though it was a night flight, most passengers seemed to be awake. 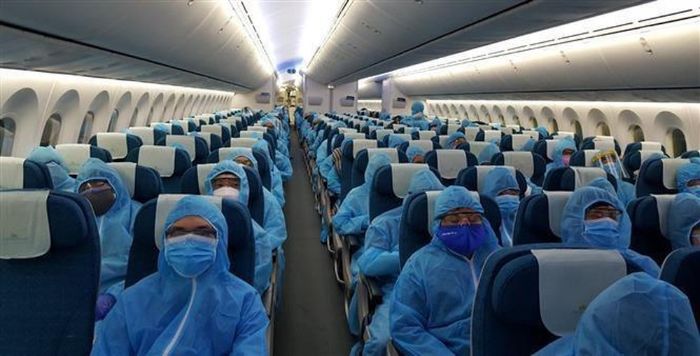 Our flight was the only one that landed at Noi Bai Airport that morning. The airport staff wore the same hazmat suits as we, and welcomed us without any words.  I filled out some documents, picked up my bags and waited for two and a half hours to go through immigration. The police officer at the immigration gate took my passport and directed me to a designated quarantine area. It was an army camp in Vinh Yen, Vinh Phuc province, 50 kilometres from the airport. The bus driver was also wearing protective clothes, and the space between him and us was sealed with yellow and black plastic.

When we arrived at the army camp, policemen and army staff divided us into three groups, based on the building where we would stay. All our luggage was sprayed with disinfectant. I shared a room with two others, a researcher and an MA student who were coming back to Vietnam from Germany and the Netherlands. We had to share our bathroom with the three girls who were living in the next room. We all received three meals a day delivered to our front door (one breakfast and two boxes for lunch and dinner, each containing a main dish with rice, a cup of soup and some seasonal fruit). Twice every day, a nurse, Chị M., came to take our temperature. In addition, two doctors came to do two quick Covid-19 tests on us at the camp (my first test was on the third day, and the second one was on the 12th day). Luckily, no one was infected by the virus.

For me, spending two weeks in quarantine in an army camp was not particularly difficult. However, I did have one painful encounter during this time. After about a week, there was a storm, which led to a power cut in the camp. We suddenly got up at 2am that night and found out that there were hundreds of giant ants in our room, some of which had bitten us. We tried to sweep them out of the room, but it was difficult to do so in the dark. In the end, we just took our pillows and blankets and ran out of the room. That night, the three of us slept on the cold floor of a neighbouring room. The next day, a doctor came to give us some medication. However, a number of terrible red big bumps stayed on our skins for the next couple of weeks.

Despite the ants, I have been taken care of well at the army camp. All staff in the camp were very nice, kindly helping us to buy and get deliveries of foods and drinks from outside. I am grateful that everyone in the camp followed the recommended safety measures. At the end of the two weeks, I received an official certificate declaring that I had been successfully quarantined at the army camp for 14 days and was not infected with Covid-19. But afterwards, I still had to stay in obligatory home quarantine for another 14 days. At least now I could be with my family. 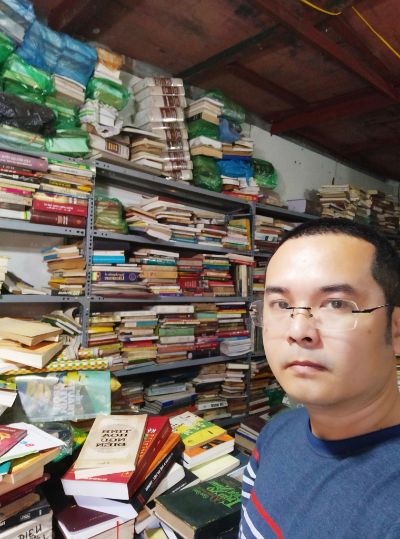 At the end of October 2020, I finally got my research permit from the Institute of Anthropology, Vietnam Academy of Social Sciences, and I was allowed to go to my fieldwork site in central Vietnam. Unfortunately, a series of four strong tropical storms hit the region, leading to much suffering locally. For me, it led to additional delays. I decided to conduct library research in Hanoi, while waiting for the opportunity to start my fieldwork research. I also used these days in Hanoi for visiting some old bookstores where I collected some useful works in Vietnamese on whale worship and festivals. The bad situation finally ended, and I was happy I could go to Da Nang on 17 November.

During my first ten days in the field, I started building up my social network, meeting local people, researchers, and other experts. I found a good place to stay, close to the beach, within walking distance from two Cá Ông (Whale Lord) temples. I also received a permit from the People's Committee of Da Nang city, allowing me to do research on Whale Worship and festivals in the province.

I would like to thank everyone who has helped me travel back to Vietnam and start my research here. Without your help, I would not have made it here.

Whale Lord, now I am ready to follow your traces. 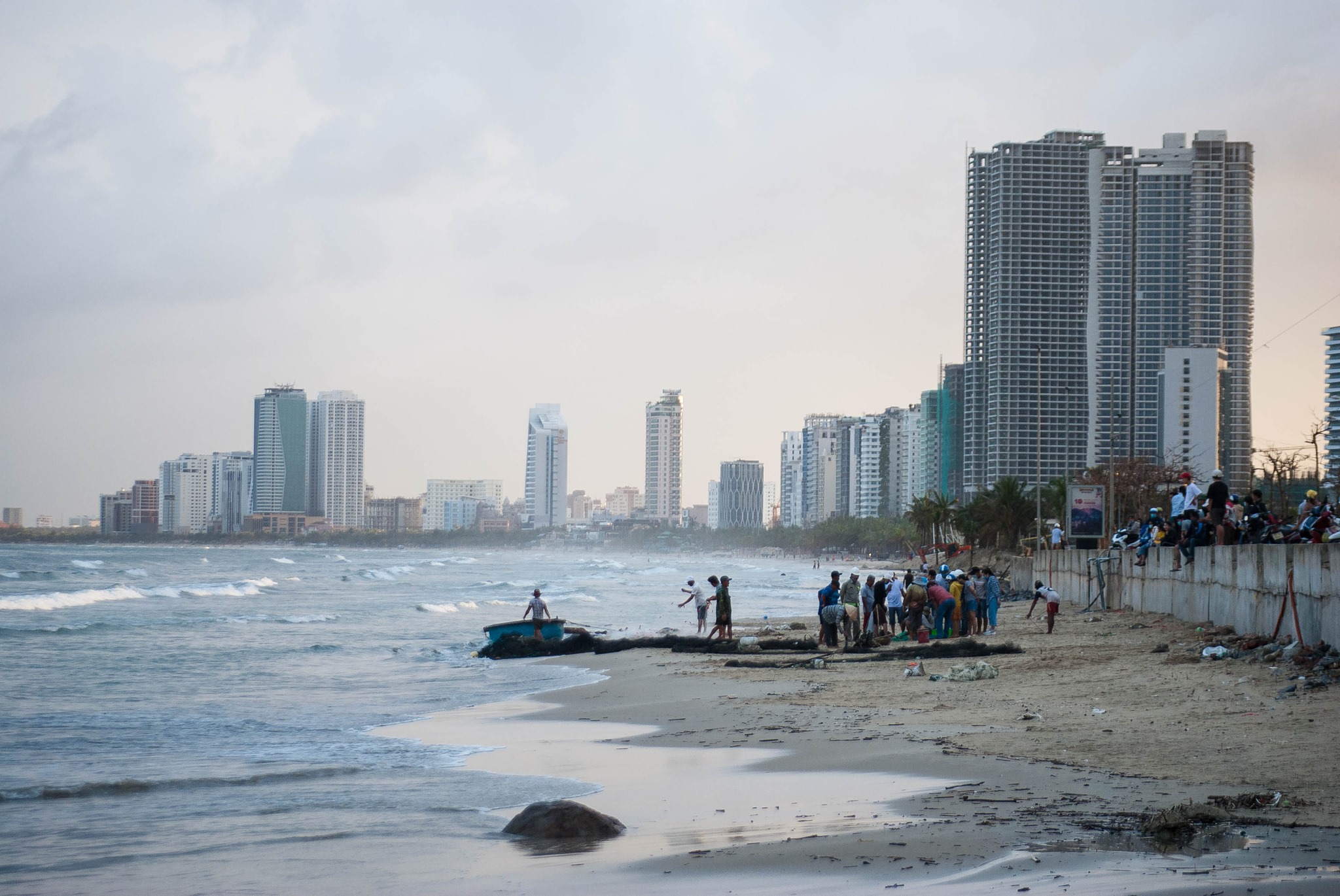