The Year of the Sea Cow

The second WhoP PhD candidate has made it to Asia and started his field research! In the last month, Marius Palz has successfully navigated Japanese travel restrictions, spent time in quarantine, met his first dugong, and moved to Okinawa. An account of his experiences. 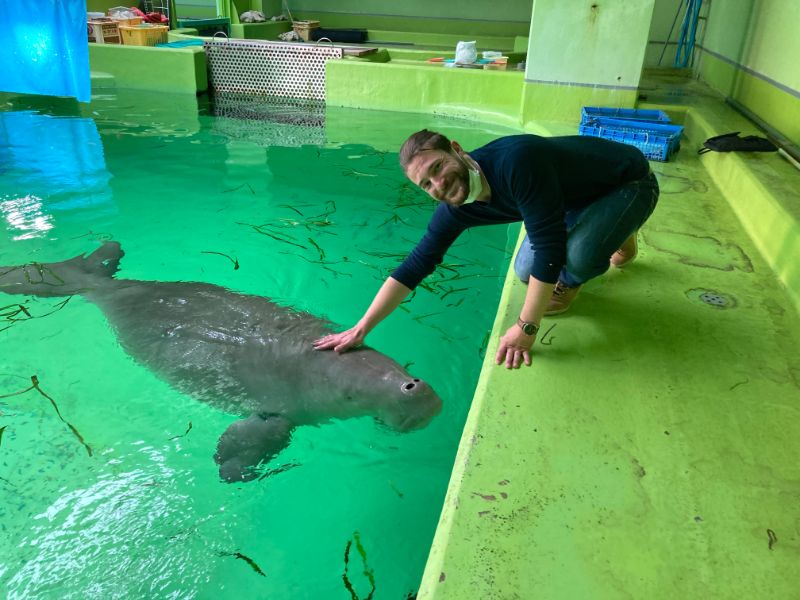 Serena and Marius in Toba Aquarium.

Going to the field: a piece of cake!

Finally, I am in the field. Finally! All it took was a lot of paperwork, two invitations by a host institution, four weeks of health monitoring (two of which I had to spend in quarantine), two Covid-19 tests, catching the perfect timing to enter Japan between two travel bans, and dealing with a rising uncertainty about the declaration of a state of emergency in Japan’s major metropoles. A piece of cake…

But let’s start at the beginning. I joined the Whales of Power team in November 2019 and everything went great until the pandemic hit. In the first couple of weeks I was secretly hoping that the crisis would be over soon, but one by one our team members experienced difficulties to set an essential part of their research in motion: fieldwork.

My original plan had been to leave for fieldwork in September, but after the outbreak of the Covid-19 pandemic Japan implemented an entry ban on nearly every nationality on the planet. When it became clear that the Tokyo Olympics had to be postponed, I realised that the travel restrictions would be in place for a considerable amount of time. Still, I was hopeful that I would be able to go to the field at a later stage.

It was not until October that Japan lifted its travel ban, and only under strict restrictions: tourists were still exempt from entering the country, while business and research travel was only possible after an invitation by a host institution. To get a research visa in Japan, one needs the invitation of a research facility in the country. I had already received an invitation from the University of the Ryukyus, but the new situation meant that I had to get a second one. In addition, I had to monitor my health two weeks before leaving for Japan, take a negative PCR test 72 hours before boarding the plane, and take another test at the airport after arrival. Every step got me thinking: will the host institution be willing to invite me under these circumstances? Will I get sick in the two weeks before departure and have to postpone fieldwork again? What if the PCR test result is positive? If the on-arrival test is positive, will I be sent back to Norway? Fortunately, everything went smoothly and I found myself entering the country on December 18.

After my arrival in Tokyo, I was not allowed to use public transport including domestic flights, which meant that I could not get a connecting flight to Okinawa, my field site. Instead, I had to stay in quarantine in Tokyo for two weeks. Luckily, I had private options for quarantine and did not have to stay in a small hotel room. While being in quarantine I had to report my health condition to my host institution every day. During this time new mutations of the virus were discovered in the United Kingdom, South Africa, and Nigeria. As a result, Japan decided to close its borders again on December 28 for most foreigners, with only a few exceptions (e.g. those who have family in Japan). I had considered leaving for Japan after Christmas. To go before the holidays was a lucky call: if I had waited longer, my fieldwork would have been postponed again.

The year of the (sea) cow

At the start of the New Year, I was finally allowed to leave quarantine and start my research. I had planned to meet representatives of environmental organisations and get acquainted with the Okinawan community in Tokyo. However, on January 7 the Japanese government declared a state of emergency for Tokyo and its neighbouring prefectures, as infection numbers were rising up to 2000 people a day in the capital. People were asked to work from home, and restaurants had to close after 8pm and were not allowed to serve alcohol after 7pm. Other metropolitan regions, like Osaka-Kyoto, Nagoya, and Fukuoka, followed soon. At the time of writing, these measures and travel restrictions are still in place, but as in many European countries, infection numbers are rising nonetheless. Therefore, even though I was just a convenient subway ride away from my interlocutors, I conducted interviews via Zoom and avoided the busy hubs of Tokyo. However, one research trip had to be made in person, as one of the main protagonists in my research is not interested in getting in touch via the internet.

My destination, Toba Aquarium, is one of a handful facilities in the world that has managed to keep dugongs in captivity. Currently there is only one dugong left at Toba Aquarium, and after conducting an interview with her caretakers, I got the chance to meet her. As an infant, Serena got separated from her mother by a typhoon and was raised by humans. Later she was given as a diplomatic gift by the Philippine government to the government of Japan and has been living in Toba Aquarium ever since. As the number of these sea cows is in decline in nearly all its habitats, it was truly a special moment for me to meet Serena. Who knows if I will get the chance to meet some in Okinawa, where numbers are critically low?

Doing fieldwork during a pandemic

With the state of emergency in place, I feared that inland travel might become impossible, but fortunately, my transfer to Okinawa did not become a problem. On January 13, I moved to Japans southernmost prefecture and settled in my temporary accommodation at the University of the Ryukyus. Here I will establish a network, meet with representatives of the peace movement, and do archival work. Later, I will conduct fieldwork in the northern part of Okinawa island, where the government of Japan is constructing a new base for the U.S. military in an area that is widely believed to be one of the last feeding grounds of the Okinawa dugong.

I feel relieved to be finally in Okinawa, but I also ask myself to what extent proper fieldwork will be possible. In Toba I came across posters fixed to doors of restaurants and bars, apologizing for not being able to serve customers from outside the prefecture to prevent the spread of the Corona virus. Here at university, I saw a poster declaring, "STOP! Corona discrimination", a campaign implemented by the prefectural government in cooperation with big companies. The pandemic is not only affecting people’s health, but also poses questions of interpersonal security and social interaction. For me it is still too early to determine how far the pandemic will affect my overall research, but one thing is already clear: so far it has been anything but a piece of cake.

By Marius Palz
E-mail this page