Whales of Power currently has three PhD researchers. Sonja Åman and Tuan Anh Nguyen started in September 2019. They conduct research on, respectively, whaling and spirituality among indigenous peoples around the Pacific Ocean and contemporary Vietnamese whale god worship. Marius Palz started in November 2019. His research focuses on the historical and contemporary meanings of the Okinawan dugong. They introduce themselves and their projects. 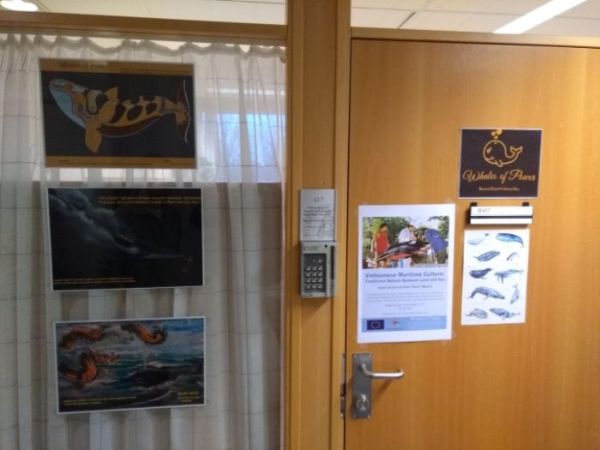 Sonja: "I am a political ecology graduate from SOAS, University of London, originating from Northern Finland. I am joining the Whales of Power team to work on Work Package 5, focusing on indigenous whaling and eco-spirituality. During the past decade, I have lived in various parts of Europe and Asia, collecting experience that I hope will aid me while working together with the Whales of Power team.

When I found out about this project, I had an instant gut reaction that told me I wanted to be part of it. For me, Whales of Power is the ideal marriage between my life-long passion for ecology and conservation, and my academic background in environmental social sciences. Luckily, I have also always been obsessed with and mystified by whales.

I am particularly curious about perceptions of nature and the natural, and I will aim to overcome the divisive structures surrounding the study of the environment and society as separate entities. During the next three years, I hope to expand my understanding of the local traditions of indigenous whaling and the dialogue between indigenous whaling and the international whaling policy. Through my research, I hope to report on the different, and perhaps unexpected, manifestations of the interconnection of local behaviors, environmental shifts and policy making."

Tuan: "I received a master’s degree in social and cultural anthropology in 2006. After graduation, I worked as a lecturer at Hanoi University of Culture for two years, and then as a researcher at the Institute of Anthropology, Vietnam Academy of Social Sciences.

My PhD project consists of an anthropological examination of Whale worship, a popular ritual practice and belief of fishing communities in Vietnam. It focuses on the ways in which humans respond to socio-economic and environmental change in Vietnamese coastal communities. Furthermore, in examining human and non-human (animal, whale god) relations, my research will explore new meanings attributed to popular, traditional ritual practices and beliefs in contemporary Vietnam.

I have always maintained a close relationship with nature and animals since I was a child. My father was a lecturer at a local college, he loved teaching and researching but life in Vietnam was hard in the 1980s (when I was born). His salary was only 13 kilograms of rice per month, and my family had a garden next to my house for growing vegetables. We owned dogs, cats, pigs, geese, fish, and chickens that we raised for eggs, and I adopted them as my pets. My mother was an oriental medicine doctor, and her shop at Thai’s Market provided cheap health services for poor people in my hometown in the north of Vietnam. We called it Thái because, during this time, there were many ethnic minority people who went down to the market to trade with the ethnic Vietnamese people. These childhood experiences led me to join the field of cultural anthropology later in my life.

My field of specialization is the anthropology of religion. My earlier research focused on funeral ceremonies of ethnic minorities and the phenomenon of telepathic grave seeking in Vietnam. Based on my earlier experiences, I decided that human-animal-god relationships as expressed in Whale worship in south and central Vietnam would be an interesting and relevant topic for a PhD dissertation. That was why I applied for the Whales of Power PhD position at the University of Oslo."

Marius: "In 2012 I achieved my B.A. at Tübingen University and in 2016 my M.A. at the University of Halle-Wittenberg, both in Cultural Anthropology and Japanese Studies. While staying in Halle I got the chance to study abroad at the University of Tokyo and as I was interested in minority issues in Japan, I decided to conduct field research among the Ainu community in Japan's capital. This experience not only led to a strong interest in minority-state relations, but also introduced me to the theme of environmental anthropology and how human-nature relations expressed in (indigenous) rituals can be essential for making minorities visible in public space. In the case of the Ainu, ritual practice can therefore function as a form of protest against narratives of a homogeneous Japan.

Coming from this background I got interested in the Whales of Power project, because it combines questions on human-nature relations, and their expression through ritual, with the political struggles of small communities. I will be looking at the transformation of the Dugong from an animal imbued with cultural/ritual value to a symbol of protest against the construction of a military mega-base in Henoko, Okinawa. As the Dugong faces extinction in the waters of Japans southernmost islands, it becomes more and more present by being absent, showing us that agency also lies with non-human entities, especially when they are under pressure.

I am looking forward to exploring how nature manifests its power in the form of aquatic mammals. With the presence and absence of these magnificent beings, Mother Nature shows us once more how she shapes human life as much as the other way around, posing the question of where one starts and the other ends. We are a part of nature and so nature is a part of us.

When not working on the Whales of Power project, I like to travel and process my experiences into fictional writing. Music of all sorts is another passion of mine and there is no better way to end a hard day of work with a cold beer in the local watering hole, going on a trip with Pink Floyd, diving into the mind-blowing guitar play of John Frusciante or let the incredible beats of toe’s Kashikura Takashi do their thing."

By Aike Rots
E-mail this page