Sunny October afternoon in downtown New York. Elbowing through the crowd of Chinatown with all the booths and shop sellers around makes one feel it is summer again (at least “Norwegian summer”). Finally, at the crossroad, it is time to turn right onto Mott street. Counting the house numbers to 62. This is the address from where the New York Chinese School has been promoting Chinese immigrants` native language, culture and heritage for 90 years. I am here to find out how the school has been doing this for decades, and to experience a typical workday afternoon in the school building. 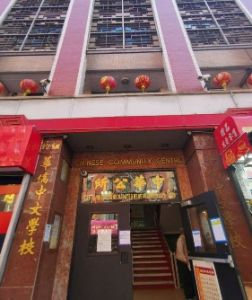 Entrance to the Chinese Community Center. Photo by the author.

This is a blog post about the old educational institution, in the middle of Manhattan Chinatown. Upon visiting their website, one can read that the mission of to school is teaching written and spoken language and promoting Chinese culture and heritage. By taking readers through the school`s building and meeting the school`s principal and some of the youngest students, this presentation will answer the following questions: In what way has the school been doing this for more than a century? Moreover, what motivates parents to keep sending their children to the school today? How do young students share their knowledge?

Established in 1909 by local Chinese communities, the school has changed couple of addresses within the area of today`s Chinatown, only to move to its current address in 1929. Nowadays, it occupies several floors of the building of Chinese Cultural Center.

Surrounded by shops and restaurants, the entrance to the centre features red lanterns hanging above and colourful posters announcing classes and activities. The school blends in with its surroundings yet distinguishes itself as a keeper of something ancient and tranquil in the middle of busy, modern times.

Once inside the building, one is immediately informed about the school`s current offerings. Posters on the left-hand side call on children and youth to join classes in Mandarin and Cantonese, Chinese calligraphy, dance and martial arts.  On the opposite wall, a computer screen continuously runs a video about the school in Mandarin Chinese, accompanied with traditional Chinese subtitles and a joyful promo melody, which repeats in one`s head for a while afterwards. The video also presents the Chinese Consolidated Benevolent Association, whose board of directors manages the school from the centre`s second floor.

Walking up the stairs. The staircase is ornamented with a red fence in traditional style. The landing between the first and second floors welcomes visitors with a big picture of Confucius (551-479 BC), the famous Chinese philosopher who emphasized the role of learning in the process of self-cultivation (Gardner 2014).

The school’s main office and some of the classrooms are found on the third floor. In front of the entrance on the third floor, there is another poster showing the school’s afternoon activities on weekdays and their whole-day schedule during the weekends. I press the doorbell and wait for the door of this century-old cultural treasury to open.

It is Friday and the meeting with the school principal Jennifer Wang and the school`s teachers has been strategically scheduled for 1 pm, before the classes start. After a nice welcome in the staff room and an introduction of my MA research project, the principal takes me through the hallway lined with lanterns and framed photographs, displaying decades upon decades of the school`s history.

The oldest exhibited photograph, taken in “the 20th year of the Chinese Republic”[1] (Zhonghua minguo ershi nian 中華民國二十年), shows more than 100 students of varying ages with their teachers in front of the school building.

“Today, our school takes in around 50 students, aged four to ten, for the afternoon classes Monday through Friday. And during the weekend we have more than 700 students. They come from outside the city too, not only from the five boroughs [of  New York]”, the principal says.

According to her, parents do not send their children to the Chinese school only to keep Chinese ethics and values preserved within the family and community. “Many of them want their children to learn the language and the culture, so that they can do better business with China in the future. There are many that don’t speak Chinese, or don’t know it well enough, so by sending children to our school, many parents invest in their future”, the principal explains.

Besides the language classes for children and youth, the school has recently started with classes for adults as well. In addition, the culture of ancient China has been promoted by the school since its earliest stage, Wang says. This includes period which started in prehistoric times and lasted until the foundation of Republic of China in 1911.

The Confucius Ceremony, or Sacrifice to Confucius, dates back to the Han Dynasty (206 BC.220 AD), when it was first observed in 195 BC (Lee et al. 2015). The school’s website, http://www.nychineseschool.org/, displays photographs of earlier ceremonies organized by the school. Here, one can see the school’s board of directors bearing sacrificial fruit to the big picture of the master, while the students, in traditional custom, hit the drums rhythmically and perform an ancient dance.

“Since the 1950s, we have also had our Crimson Kings Drum, Fife and Bugle Corps, which performs every year during the Confucius Ceremony and Lunar New Year Parade,” Wang adds.

Students are in the House

Soon after that, a back door opens, and the previously quite peaceful hallway gets filled with voices and laughter. Children, who get picked up from their ordinary schools by the Chinese school driver, “are in the house”.

“Hello!”, they yell one after another, while the principal tries to catch some of them and make them introduce themselves. Some of the little heads stop surprised and stare at the unknown guest with her notebook and papers. “Ni hao!”, one of the braver girls steps up, and I quickly prepare myself for  a short chit-chat in Mandarin with her. “Why do you dye your hair?”, she continues in perfect American English.

Their teachers arrive in the hallway and remind the kids that there is no time to lose. Children are quickly placed in two classrooms (divided by age groups), where they have their lunch before the classes start. The weekday afternoon program includes tuition and homework support, Chinese class, arts and crafts, and sports.

I am not spared and have to sit in a bench with my new “classmates” and open my notebook. While, in the neighbouring classroom, students between seven and ten years of age write their homework in peace, these younger ones (four to six years old) are less restrained. A couple of them soon gather around “my” bench and want to test my Chinese. They make me read their Chinese names written on the nameplates each one of them has attached on their clothes. (Their English names are written above their Chinese ones.)

After I do my schoolwork by demonstrating skills in writing Chinese

characters, one of them speaks up: “I can write Chinese too! Let me show you—I can write the numbers!” She grabs my pen and, as she writes characters for numbers one to seven, after every character we all read out loud the numbers in Chinese. She also re-writes my nickname in Chinese, by copying my clumsy handwriting.

A quiet boy sits in front of me and looks at a commercial brochure, which advertises children’s toys. He ignores other kids` attempts to talk to him. After we are left alone for a few minutes, I point at one of the Transformers` “good guys” in the brochure. “I like that one” (Wo xihuan zhege 我喜欢这个), I say. He is startled for a moment, but then convinces me that another one is “more fun” (geng hao wanr 更好玩儿). He finally turns around and does his best to draw a rhomboid, which he has just learned in his math class. The girls are back.  “He is drawing the shapes!”, one of them shouts in English. It soon gets noisy again and their Chinese teachers eventually convince them to get back to their homework.

I join the principal in the hallway. She wants to show me the other classrooms, which will be full again at the weekend. As we walk, she remarks that the school program is a combination of “culture, activities and contests” (wenhua 文化, huodong 活动 he bisai 比赛).

Further in the hallway, the principal points at numerous awards won by the school’s students in competitions with other Chinese schools in New York. “These awards belong to the students who performed best in Chinese speech contests, poetry recitals and word recognition [recognition of Chinese characters]”, the principal elaborates.

I want to hear more about the poetry; is she referring to the poetry of ancient China`s dynasties? "Exactly. The students are trained in reciting poetry from, for example, the Tang and Song dynasties,” Wang answers proudly. The Tang dynasty (618 – 907 AD) witnessed the peak of Chinese poetry and the works of prominent poets, such as Li Bai, Wang Changling and Du Fu. However, the Song dynasty (960 - 1279 AD) also had its own prominent poets: Su Shi, Mi Fu, and first Chinese female poet Li Qingzhao (Yuan 2017).

The principal further describes the school programme, most of which has been preserved for decades. Among the school`s syllabus one can find more ancient, traditional parts of Chinese culture, namely, the above-mentioned poetry from the imperial time, Chinese calligraphy (shufa 書法), traditional folk dance (chuantong minzu wu 傳統民族舞) and White Crane Kung Fu (baihe paiquan 白鶴派拳). Besides that, children can sharpen their skills in modern Mandarin and Cantonese, but also learn self-defence, modern ballet and Latin dance, or take piano and drum lessons.

After showing me the classrooms, we visit a spacious gym on the fifth floor. A massive poster of Confucius covers the whole height of the wall. The inscription on the poster quotes Confucius, saying: “To learn without thinking is blindness, to think without learning is idleness” (Xue er bu si ze wang, si er bu xue ze dai.  学而不思则罔，思而不学则殆). This is the room reserved for the annual Confucius ceremony, Wang explains.

Finally, we also visit the auditorium—the biggest room in the school—which can house 428 people. “Graduation ceremonies happen here every year. This hall gets full of students, teachers, parents and many officials from the school and city community,” Wang states.

Many traditional festivals of ancient China, such as the Lantern Festival, which rounds up the New Year celebration, the Dragon Boat festival in spring, and the Mid-Autumn Festival are taught within the classrooms, where students are introduced to the stories behind the festivals, their symbolism and customs.

True to tradition, in January the school will mark Lunar New Year by participating in the local street parade. We agree to meet again during the Lunar New Year celebration, if not sooner.

Leaving the building. The melody from the promo video keeps on playing in my head, while elbowing my way towards Canal street. The old school— keeper of Chinese cultural heritage—made a strong impression, and the visit was enriched with an unexpected get-together with the young and excited students. Meanwhile, the silent, black and white photographs, framed on the walls, continue to testify that the New York Chinese School has educated Chinese immigrant youth about the riches of Chinese culture for 110 years. The youth who, generation after generation, runs through the same hallways, greets Confucius, learns the language and harvests knowledge about the old culture for their future conquests. My name is Dragana Paulsen and I am a master student in Chinese society and politics at UiO`s Department of Culture Studies and Oriental Languages​. The focus of the Master`s thesis I work on, is Chinese ancient culture in New York City. I live and work in New York.

By Dragana Paulsen
E-mail this page