The Text Laboratory is currently developing a new version of the search and post-processing tool Glossa. 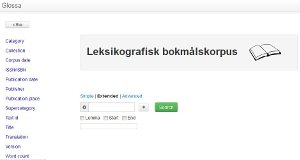 The new Glossa version will continue to offer a simple and functional search interface for both written corpora, multilingual corpora and speech corpora. But the new version of Glossa is much easier to install than the old version. When the accompanying corpus processing pipeline is ready, it will also be easier for institutions and researchers to create their own corpora and put them on their own server or even on their laptop.

The new version can also be used to search several different types of corpora. This includes corpora located on different servers from the one where Glossa itself is installed. This is possible by using CLARIN federated content search (for instance, a Glossa UiO installation can search a corpus located on a server in Germany).

In addition, the new Glossa has a more modern interface which can be easily themed for individual Glossa installations. The search interface is available in several versions: In addition to a version similar to the interface of the old Glossa version, there is also a simpler (Google-like) interface and a more advanced interface that allows the use of regular expressions.

Work on the new Glossa is funded by CLARINO, and the entire system is open source software that can be freely downloaded. The system is currently under heavy development, and much of the functionality of the old version has not yet been transferred to the new one. However, the current version does support searching for words, phrases and grammatical constructions as well as restricting the search according to metadata selections.

The new Glossa was selected as a showcase during the annual CLARIN meeting 2013 in Prague. See the presentation on the CLARIN web page.

Read more and search in a simple demo version here.