The NORM Corpus consists of more than 5000 student essays collected in the research project Developing national standards for writing. A tool for teaching and learning (The NORM Project). The essays were written by pupils in school years 3, 4, 6 and 7 in comprehensive school. The corpus contains more than 1.1 million words. 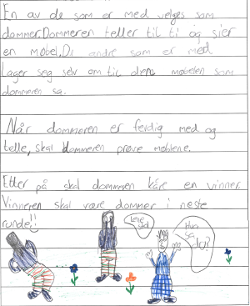 The essays are of different kinds. There are essays from most school subjects, written for different purposes and through different acts of writing. In sum the essays give access to how writing as a key competency is put into practice in Norwegian comprehensive school. All essays are in Norwegian but were written by pupils from a variety of language backgrounds. Some texts are stored in multiple versions, a first draft and an elaborated version developed on the basis of teacher feedback.

The texts were collected during the period 2012-2014 and were transcribed by the NORM Project. The corpus was established in collaboration with the Text Laboratory and is searchable in the new version of Glossa.

The corpus is freely available for purposes of research and teaching. We point out that the texts cannot be used for commercial purposes.

When using the texts it should be referred to the Norm Corpus: http://www.hf.uio.no/iln/om/organisasjon/tekstlab/prosjekter/norm/

Read more about NORM (in Norwegian)

Read the user manual (in Norwegian)