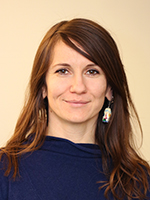 Anastasia Kriachko Røren holds a Master degree in history and archives (Russian State University for the Humanities, Moscow) and was involved in academic and project-based research and services related to audiovisual archives and documents. After her studies, Anastasia worked for six years as an editor in Channel One Russia. Following her interest in 20th century East-European history in 2015 she finished her second Master program in Eastern-European Studies at Bologna University.

At Bologna, her thesis “Bringing back images’: The Discursive Representation of Audiovisual Documents in the Outreach Programme of the ICTY” was awarded the best thesis award and subsequently published.

Her research project at ILOS is called Documenting the nation: Documentaries as discursive nation-building tools and focuses on the nation-building process in Russia as presented in, and affected by, documentary films. The research addresses documentaries as an authoritative source of information, they create the reality and are widely used in politics. In order to study their impact, she explores the documentaries through discourse analysis, focus group and interviews.

ASEES The Association for Slavic, East European, and Eurasian Studies