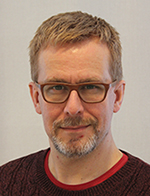 My research has focused on understanding nonstandardised spelling practices in historical English, especially in relation to scribal copying, textual transmission, and standardisation. I have been seeking to apply techniques from natural language processing (such as N-gram modelling) to quantify the similarity between Middle English texts despite their lexical differences, and I have been seeking to relate the observed variation to variables traditionally downplayed (such as the size of the page). As a recent departure, I have been building regression models of paleographical variation found in historical documents and have developed a research interest in historical punctuation.

I serve on the advisory board for the journals Studia Anglica Posnaniensia and Studia Neofilologiczne and for the Boydell & Brewer book series Index of Middle English Prose. Peer-reviewing for journals and publishing houses is a task I routinely do, and I have evaluated grant proposals for the European Commission’s MSCA fellowship programme several times as well as for three national research councils. I have been an opponent at three doctoral defences and have been, or currently am, involved in the supervision of six doctoral candidates. As a team player, I am or have been involved in various externally funded collaborative projects, which provide a service to the academic community by making their corpora freely available online. In 2021, I had the good fortune to win a British Academy Neil Ker grant to compile a volume in the Index of Middle English Prose series covering repositories in Edinburgh, as well as an MSCA Individual Fellowship (as supervisor) to work on the British Library's Cotton collection.

I am certified in basic university pedagogy, master’s supervision, and doctoral supervision. At ILOS, I teach first-year modules on Present-day English grammar and phonology/intonation every year, as well as other, higher-level modules which address the history of the English language. However, my experience is broader. I have, for example, taught academic writing and English as a Foreign Language, and I have supervised several bachelor’s theses discussing learner English, as well as variationist sociolinguistics.

My master’s degree is from the University of Copenhagen and was supervised by Arne Zettersten. It included an exchange year at the University of Glasgow. I assisted with the lexicographical work on the Politikens Engelsk-Dansk med betydningsforklaringer dictionary at this time, based on the Collins COBUILD dictionary of English. My doctorate was completed at De Montfort University, Leicester, where I also contributed to the Canterbury Tales Project as a research assistant; this was an externally funded project which produced scholarly digital editions and applied phylogenetic methods to medieval textual traditions. My First Supervisor was Norman F. Blake. Adam Mickiewicz University, Poznań, was my base for a five-year period as was the University of Stavanger, and I have also been successful in winning external funding for research stays at the University of Notre Dame in South Bend, Indiana and the Netherlands Institute for Advanced Study in Wassenaar.

I have rarely taught computational linguistics/digital humanities, although I have some professional and educational background in commercial machine translation and machine-assisted translation as well as in electronic editing, markup languages, and language models.

I have taught and examined a variety of courses at BA, MA, and PhD levels. At UiO, I very regularly teach these ones:

R Markdown (LaTeX-like, lets you to write papers in RStudio and output them in formats like .tex, .pdf, or .doc)