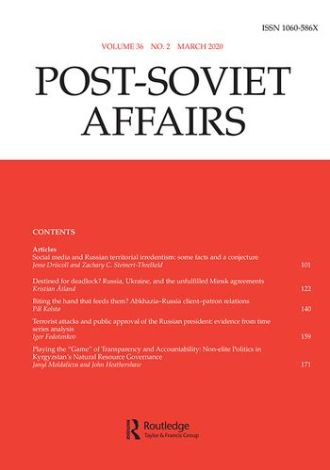 All patron–client nexuses are marked by a high degree of asymmetrical power – especially with de facto states, which depend upon the patron for their very survival. Thus, it is surprising to see how de facto client states repeatedly show that they are both willing and able to defy the wishes of their patrons and pursue their own agendas instead. Moreover, the patron may be willing to tolerate such rebelliousness. What can explain such “disobedient” behavior?

In this article, Pål Kolstø examines three contentious aspects of Russian–Abkhazian relations: the process leading up to the signing of an extended bilateral agreement in 2014; the tussles over how to fight crime in Abkhazia; and acrimony over Abkhazia’s reluctance to allow Russians to buy property in their country, despite massive pressure from Russian authorities.

The publication is available through Taylor & Francis.