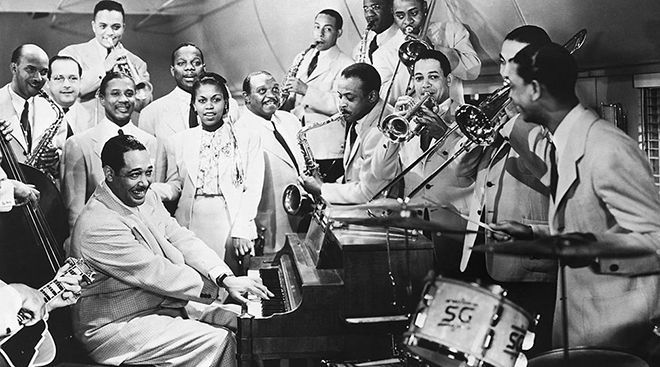 Jazz musician Duke Ellington was key to the Harlem Renaissance. He had his big break at The Cotton Club in Harlem, New York and became world famous in the 1930s.

“In those days class was inextricably linked to race. Black America during the 1920s was synonymous with the working class and thus low culture. There was a small black elite, but they had little influence in the larger context.”

These are the words of Louisa Olufsen Layne, postdoctoral research fellow at the Department of Literature, Area Studies and European Languages (ILOS) at the University of Oslo, Norway. She is conducting research on how questions relating to culture, taste, class and race were broached by the thinkers of the African American intellectual and cultural movement in New York during the 1920s, known as the Harlem Renaissance.

The Harlem Renaissance is the term used for a cultural resurgence among the African American population in the USA during the period 1920-1940. It is also known as the New Negro Movement.

The Harlem neighbourhood of New York became the nexus for artists, authors and musicians who were exploring the experiences and lives of black Americans in new ways.

“What is popular and what is elitist have been discussed in various ways during different periods. What the authors of the Harlem Renaissance wrote and thought about taste has value today,” she says.

Langston Hughes is considered a leading figure in the Harlem Renaissance. He invented jazz poetry, inspired by jazz and blues rhythms. However, Hughes also wrote critical articles and newspaper columns where he presented what Layne regards as an early sociology of taste.

“Jazz and blues was music for the black masses. Hughes defends this popular culture, but simultaneously argues that black culture is more than just one thing”, she says.

According to Hughes, there will always be something that is perceived as being black culture, and this will be linked to the position of black people in society. During the 1920s, the vast majority of black people were low-paid workers, but at the same time a well-educated middle class was starting to emerge.

“So it became important to look at class and race together,” says Layne.

Hughes himself belonged to the educated middle class, but he placed himself among the radical avant-garde.

“He represented the younger Harlem writers who opposed bourgeois culture and who wanted to celebrate nightlife and sexuality.”

In the poems, newspaper columns and essays that Hughes wrote, he played with the stereotypes about black people. He wrote about a character called Simple, a sort of everyman, but also about an ambitious poet who distanced himself from his blackness in order to gain recognition.

“After slavery, all black intellectuals, in particular middle class intellectuals were very keen not to confirm these ugly stereotypes. Hughes thought that it was about satisfying the expectations of white people, and that it was a strategy that would fail: you cannot counteract racism by trying to show that you are worthy, because that is not what racism is all about.”

According to Layne, it was politically important for Hughes and the Harlem Renaissance to uplift jazz and blues by showing that these genres possessed literary and poetic qualities.

“When we say that one type of art is worthless, we’re talking about the people. What is high and low culture is related to who is high culture and who is low culture. And what we think should be read and heard is all about which voices and stories we want to read and listen to,” she says.

Consequently, there were no distinctions between aesthetics and politics for the Harlem Renaissance. However, in the same movement there was disagreement about how to elevate the position and culture of black people.

“While Hughes wanted to give popular culture a higher status, people like the academic W.E.B. DuBois supported a different strategy. His so-called uplift ideology was about refining black culture, polishing it and raising it up to the finer echelons, which had previously been reserved for white culture.

Whereas George Schuyler, another strong voice during the era, represented African American conservatism. He thought that there could be no black art, because there was no difference between black and white Americans.

“One of the exciting things about this era is that the intellectuals obviously disagreed!”

Layne has analysed Hughes’ lyrics and other texts in light of the theories of the French sociologist Pierre Bourdieu. After his classic sociological work, Distinction, was released in 1979, Bourdieu set the tone for how taste, class and so-called cultural capital are understood. Layne finds the lack of attention devoted to race in Bourdieu’s theories striking.

“How many times have we not heard about cultural capital – and class? It is odd that not more people talk about racialisation in the same way. It becomes the elephant in the room. Why should we talk about what sort of teacups people have, but not about the fact that some cultural expressions are derived from racialised contexts?”

She regards it as a weakness that Bourdieu’s theories are colourblind. Layne also points out that the left-wing’s tendency to look to more dogmatic Marxist theory has often led to a misunterstanding:

“Many people think that class came first, and that talking about race is a new trend. But Hughes is one example of the fact that this is a 100-year old discussion.”

Seeing how class position, race, gender, sexuality or other markers of difference combine in discrimination is what we today call intersectionality. This has become a buzzword among both academics and activists after it was first coined by the criminologist Kimberlé Crenshaw in 1989 and subsequently adopted by feminists during the 2000s.

“Words and concepts are important, but it is also important to try to appreciate what people are actually trying to say and to value different types of knowledge production. People have always produced theory of various kinds,” she emphasises.

The goal was to change the old mentality

Since 2013, the mass movement Black Lives Matter has had an impact on the political agenda in the USA, and many internationally recognised artists have supported the movement and emphasised their “blackness”. Artists such as Beyoncé, Janelle Monáe and not least the rapper Kendrick Lamar have also been embraced by a large white public, even in Norway.

“My guess would be that Hughes would have thought that it was cool that Kendrick Lamar has become so popular. Hughes wanted people to understand that black is beautiful. But he also wanted to show that culture is dynamic and that we can move between classes. For example, spirituals were an example of low culture, but they were almost regarded as being classical culture during the twenties,” Layne points out and continues:

“But if anything is held in high regard today, it is important to remember that it has not always been like that. Nor is it as easy as saying that you are not racist if you like one black artist. There were many hip white people who wanted to go to Harlem and see black jazz too, but black people were not allowed as guests in those same clubs.

The political project was also larger than just getting white people to love Duke Ellington and Billie Holiday, emphasises Layne.

“The African American thinkers wanted to change the old mentality. It was not enough to let one black person into the club – it was about understanding and fighting the mechanisms behind oppression.”

For the civil rights movement during the 1960s, the Harlem Renaissance served as proof that black people also had intellectual traditions.

“Martin Luther King was keen for us to remember and recognise the Harlem Renaissance. It was the first broad mobilisation of black intellectuals.”

Layne wants to highlight the legacy of the Harlem Renaissance and thinks that there are historical reasons why their theories are less well known.

“Perhaps people thought that is it only interesting for African Americans or those who belong to the African diaspora, and not for “everyone else”. In my opinion this is completely wrong. And the fact is that this logic is almost never used the other way round.”

Her project concerns precisely the use of texts and sources derived from what she calls a valuable historical archive. Layne believes that these sources could help to improve today’s discussions about identity politics.

“The past have produced many perspectives that still feel original and fresh. What the Harlem Renaissance wrote is still relevant to discussions about good taste and literary quality today.”

See also: Black Lives Matter has put racial politics at the center of the US elections

Louisa Olufsen Layne is a postdoctoral research fellow at the Department of Literature, Area Studies and European Languages (ILOS). She holds a PhD from the University of Oxford where she wrote about Linton Kwesi Johnson.

She is involved in the research group Literature, Rights and Imagined Community at the Faculty of Humanities.