According to UiO researcher Cristina Gómez-Baggethun, the fact that Henrik Ibsen’s play keeps igniting debates about democracy shows that it is real art. 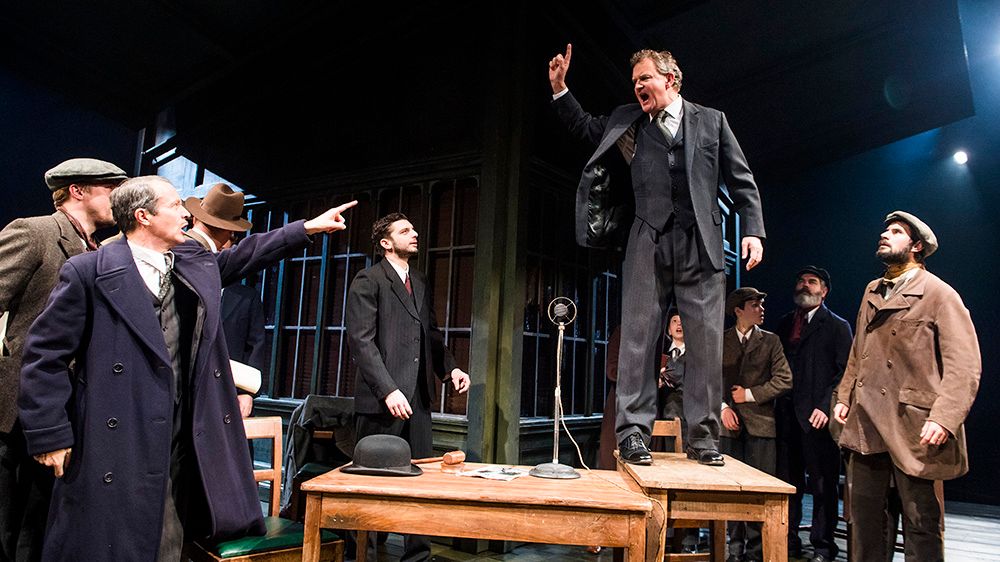 The Ibsen play An Enemy of the People is designed in a way that makes it well suited to initiate discussions about democracy in the context where it is performed. Here is the popular actor Hugh Bonneville in the role of Dr. Stockmann in a production at The Chichester Festival Theater in 2016.

Art suffered during Franco's dictatorship in Spain. Heavy censorship prevailed between the time when the General came to power in 1939 and until his death in 1975. Calling for democracy, or even meeting to discuss politics, was forbidden. However, at the start of the 1970s there was one place where lively discussions about democracy took place: the theatres of Madrid and Barcelona.

Henrik Ibsen's An Enemy of the People had passed censorship and appeared before full houses in those two major cities. And it was not only the opposition who thronged to see the story about Dr. Stockmann, a principled doctor who stands his ground when the most powerful members of society try to hide the truth about the city's new spa being contaminated by harmful bacteria.

“Quite unexpectedly the play was a great success. And interestingly, An Enemy of the People was very well received by the most hard-nosed fascists in Spain, which probably contributed to its success,” says Cristina Gómez-Baggethun.

She has studied the Spanish productions of An Enemy of the People and believes that it is a perfect play for discussing difficult political situations.

“After all, the play is about democracy, and it's designed so that you can identify the different characters with various political positions,” she says.

When Gómez-Baggethun searched Spanish archives, she found that An Enemy of the People had been staged in Spain exclusively during politically turbulent times. In retrospect these could be regarded as being transitional periods. In 1971, the play was staged in Madrid, directed by Fernando Fernán-Gómez, a major Spanish film star. With Ibsen, he hit a nerve among the people.

“The play ran for months in Madrid and a round of bids took place about who would be allowed to stage it in Barcelona, because everyone wanted An Enemy of the People. The only reason why it stopped playing was because the director was bored – it was attracting full houses and could have continued for a long time.”

Gómez-Baggethun believes that the play’s success is attributable to the fact that it presented a discussion about democracy that was already underway in society.

“That was three or four years before Franco died and everyone was wondering what was going to happen. There was a lot of debate, but it couldn't take place openly because the press and everything else were censored.”

In the fourth act of the play, Dr. Stockmann attends a public meeting at which he violently accuses his opponents of being cowardly and corrupt. In Spain this was staged in a way which, according to Gómez-Baggethun, had proven successful many other places: allowing the audience to take part in the public meeting.

“Ibsen didn't write it that way, but it's almost as though he was suggesting it. And based on the reviews and people's accounts, we can see that a real debate ensued. Consequently the theatre became a place where people could legally discuss politics and democracy.”

Fascists cheered on the play

“In order to put on a play during the early 1970s, it had to pass the censors. An Enemy of the People passed with flying colours,” says Gómez-Baggethun.

It was no secret that the people putting on the play were left wing.

“The director was an anarchist and he later wrote in his memoirs that it was intended to upset Franco and his fascist government.”

However, according to Gómez-Baggethun, Ibsen’s play was close to the hearts of the fascists. A few years earlier, in 1963, two theatre artists who supported the regime had staged public readings in Madrid with their own fascist version of the play.

“It's interesting to see that you really don’t have to make many changes to make the play fit in with fascist ideology. The common theme in An Enemy of the People is the idea that democratic politics are corrupt and serve as a sort of cover for the economic power that lies behind them.”

When art is good, it's political

Like most of Ibsen's plays, An Enemy of the People has been rewritten by several translators and playwrights. When the Spanish actors were due to play their version of Dr. Stockmann in 1971, they used a translation written by the American playwright Arthur Miller.

Miller had been afraid that An Enemy of the People might be misinterpreted as a fascist play and he toned down Dr. Stockmann's speech at the public meeting.

“Pretty much every version makes Dr. Stockmann slightly more pleasant than he actually is in Ibsen’s play. However, even though the Spanish Dr. Stockmann placed less emphasis on the argument that some people belong to the upper classes and some are worth less, than he did in the original play, the fascists liked what they saw.”

The fact that the same production could have an impact on people with completely different political views shows that director Fernán-Gómez avoided creating propaganda, despite the fact that the play was intended as agitation.

The researcher believes that this is  theatre at its best.

“When it's not trying to convince people about one thing or another, but makes people think, wonder about things and discuss them, theatre can bring people from different social groups together and help build community.”

Gómez-Baggethun realises that the term ‘political art’ has long been negatively charged because it is associated with manipulation or propaganda. Since art speaks to the emotions it can be an effective tool. She herself is in favour of giving political art new value.

“I, and others with me, believe that political art is what is really art. You can only call something art when it affects people – and I mean everyone. The power to bring people together and to arouse wonder can make a difference in society,” she says, emphasising:

In An Enemy of the People, Dr. Stockmann loses his faith in democracy and argues in favour of having an aristocracy where someone worthy among the people should be raised up through education.

“Ibsen himself has said that the only political issue that he thought was worth fighting for was setting up a proper schooling system in Norway. Public education was key for him,” says Gómez-Baggethun.

It was also key the very first time that an Ibsen play was staged in Spanish – when An Enemy of the People was produced in Madrid in 1896 and in Barcelona in 1893.

“The choice probably fell on An Enemy of the People because the play reflected many of the debates taking place in Spain at that time. They had recently introduced voting rights for all men and there was a lot of debate about education and attempts to set up schools.”

Today, democracy is under pressure in several parts of the world. Recently, democracy in Spain has been put to the test in the aftermath of the financial crisis and in the brutal way in which the authorities handled Catalonian demands for a referendum on independence in 2019. Spain has also been falling in the international democracy indices.

“One of the reasons for this is political corruption. As Aristotle said: ‘democracy has a tendency to develop into plutocracy, where money rules’,” says Gómez-Baggethun.

She believes that art will continue to address the issue of democracy, either through new texts or by returning to the hero of An Enemy of the People.

“You can say what you will about Dr. Stockmann, but he is the only one who is honest and tries his best to do the right thing. The surprising thing is that all those who lie are the convincing ones, and that it is lies that triumph in a democracy.”

Source: Gómez-Baggethun, Cristina (2021): Spain in an assembly. Fighting for a future through productions of Ibsen's An Enemy of the People. PhD thesis at the Department of Literature, Area Studies and European Languages, University of Oslo.

Ibsen's international success is a tale of rewrites and copyright piracy