In this article, Geir Flikke investigates the way in which regimes based on 'limited access orders' respond to socially driven discontent, and the drivers of contentious politics in a state where the authorities assert control over society. The article is a contribution to the RUSECOPOL project. 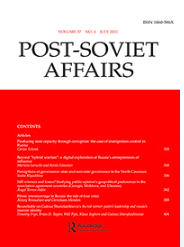 Flikke's article analyses patterns of protest, repertories, and organization of the “rubbish protests” (musornye protesty) – a phrase coined by the Internet news outlet Zona Media during the Moscow region protests of 2018–2019. The article draws on social movement theories to explain mobilization, framing, and regime repression, and engages with the model of limited access orders to flesh out the specifics of interaction between social protest forces and the Putin regime. Finally, the case is used to tentatively classify the Russian regime as a “dysfunctional” order – where grievance communication and petitioning to the head of state evolves from being an opportunity to being curtailed by bureaucratic red tape and political repression.