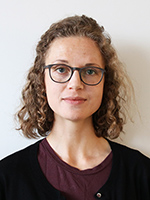 With Carmen-Francesca Banciu and Melissa Schuh. "Fictionalisation of Testimony." Culture and Its Uses As Testimony (forthcoming)

"Autofiction in the Anthropocene: Everyday Fictionality As a Response to 21st-Century Concerns in Ben Lerner's 10:04." Literature and Literary Studies in the 21st Century: Cultural Concerns--Concepts--Case Studies. Trier: WVT (forthcoming)