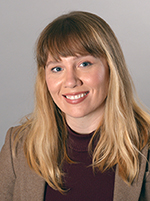 I began my academic and professional career in the US, where I served as a researcher, educator, and activist in the areas of gender and sexual health. In 2013, after earning my first master's degree in public health and development I spent several years in Zambia working in maternal child health and gender-based violence in rural communities. I continued to work remotely as a public health consultant after moving to Norway in 2017 to pursue a master's degree in Gender Studies at the Center for Gender Research at UiO. It was during my pursuit of this degree in the humanities that I finally felt I had come home academically.

I have a love for theory and have devoted my current research efforts to exploring the power of media objects and narratives to uncover situated dynamics of gender and the other. My work has specifically examined the narratives and bodies of monsters in screen media that resemble human vulvas (what I call vulva monsters). I have constructed a theoretical typology to better understand this trope and how various embodiments (humanoid, animal, or alien) influence the gendered meanings of the vulva. Using the motif of the vagina dentata as a point of origin, I both analyze and problematize psychoanalytic readings and open up space for posthuman irruptions in the study of these constantly evolving monsters. My PhD thesis is currently titled, The Return of the Vulva Monster: Screen Cultures of the Gender Monstrous. This research showcases how monsters can be analyzed not only as artifacts of culture but as tools that can drive theory and uncover the processes and mechanisms of knowledge production.

As my background can attest, I have a personal commitment to interdisciplinarity as a means of generating innovative scholarship. It is my belief that research can be a fun and social endeavor! I love connecting with other researchers and enthusiasts to produce more incisive and creative scholarship. Collaborations from across disciplines are very much welcome!