Bilingualism and the brain

More than half the world is bilingual — speaking at least two and sometimes more languages with some proficiency. Recent research suggests that bilingualism has protective benefits for the brain. The power of bilingualism is beyond language itself. 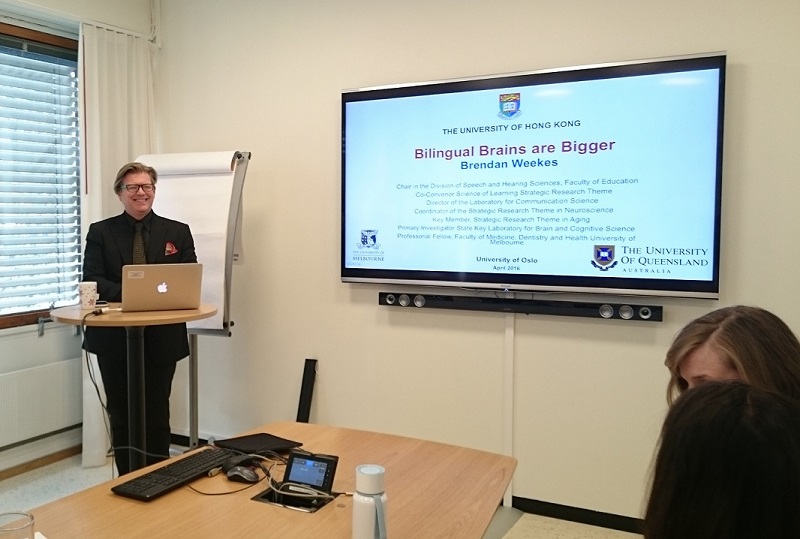 New evidence from bilingual seniors in Hong Kong suggests that greater proficiency in a second language could delay the structural decline to grey matter that is normally observed in healthy aging. Professor Brendan Weekes (Hong Kong University) addressed the overall topic of bilingualism and the brain when he visited MultiLing in the end of April. In his lecture, he referred to the Hong Kong study and many others.

Why look at neuroscience?

We know that the brain changes and adapts to things that are learned. By studying the brain, we can also say something about how knowledge is built, how it is used, and how it can be disseminated. Through neuroscience we get more knowledge about what type of knowledge is acquired and what that knowledge does to shape the brain.

What does neuroscience tell us?

How do we interpret this?

Brendan Weekes concluded that multilingualism, on the whole, is beneficial in several ways. Bilingual speakers have brain reserve, in that there is more grey matter in their brains. Whether this also means that bilingual speakers have cognitive reserve, is still an open and debated question. Bilingualism is human capital, and human capital is changing. Bilingualism has benefits, but what we know about them has to be carefully interpreted, particularly in the public arena, where the idea of bilingualism as somehow a benefit was received first with great enthusiasm, and now with much scepticism. It is important that we try to balance this kind of debate.

Brendan Weekes is Chair Professor at the Faculty of Education, Division of Speech and Hearing Sciences and Director of the Laboratory for Communication Science at the University of Hong Kong. His special areas of expertise are cognitive aspects of communication disorders and treatment of communication impairments including dyslexia and dementia using behavioural and neuroscience methods. He has published widely on topics related to cognitive and neural aspects of multilingualism, healthy aging, aphasia, and dementia. He is also a member of MultiLing’s Scientific Advisory Board.