The linguistic situation in Singapore has undergone dramatic changes in its 50 years of history. The result is a language shift away from Chinese, Malay and Tamil, and an increasing use of English. 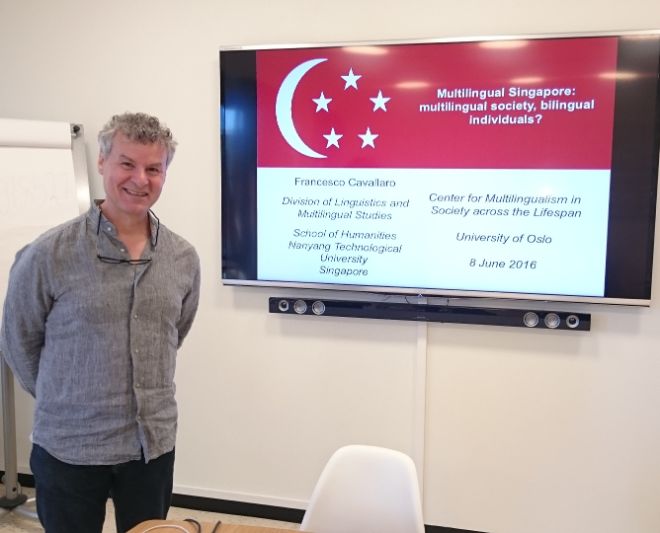 Francesco Cavallaro lives and works in Singapore, and on June 8, he held a lecture at MultiLing about the language situation in the country. He described the language policies, planning and implementation in Singapore and discussed the impact of such policies.

Singapore has always been a multilingual society, and the country has four official languages: English, Malay, Mandarin and Tamil. Being trilingual in Singapore used to be the norm, but is now very rare.

The changes in language use in Singapore are partly a result of government-led initiatives and globalization forces. Since the independence as a nation, the government has had active language planning policies in force. In 1979, they launched the Speak Mandarin Campaign. The government told the Chinese Singaporeans to replace their ‘dialect’ with Mandarin. People listened, and many stopped using their dialect. Since many of the Chinese Singaporeans didn’t know Mandarin, it is likely that some of them replaced their ‘dialect’ with English instead. The change in language use is apparent: In 1980, 11.6 % of the population used English as the predominant household language, while 10.2 % used Mandarin. In 2000, the numbers were 23 % and 35 %. This development had begun prior to 1979, but the campaign resulted in a noticeable shift in language practices among Singaporeans.

Language planning is also evident in the school system in Singapore. Currently, the main medium of instruction is English. Mandarin, Malay and Tamil are designated as “mother tongues”, in a Singaporean understanding of the word. In addition to English, students are taught one of the three languages —which one is decided by their ethnicity — to a high level. Only very good students are allowed to learn a third language in school.

Research done by Cavallaro shows that people in Singapore have a positive attitude towards their languages. At the same time, they rank other factors to be more important aspects of being a Singaporean. What characterizes their language view is the pragmatic approach, and their mother tongues have low pragmatic value.

In fact, English is the common language. Its role is important, because one needs to know English to be upwardly mobile in Singapore. Even though it is a second language for most people, it is the most important one, and parents know that. They want to give their children a safe future, and so they teach them English at home. Parents then trust the school system to give their kids a “mother tongue”. In fact, there is no situation where you need your vernacular; you can always speak one of the bigger languages, and parents know this.

Cavallaro's research also shows that what value each ethnic group places on their ethnic language is important. Malays are the language group that values their mother tongue the most, and they are also the group that uses their language the most. This indicates that the pragmatic approach can be a problem when it comes to keeping the lesser-used languages alive in the future. The government’s effort to sustain the "mother tongues" does not seem to be working when linguistic pragmatism is such a prevalent attitude among the people.

Singapore now and in the future

After 50 years of language policy and language changes, Singaporeans are still bilingual. But we now see a difference between generations. The older generation is multilingual, like the norm used to be, while the younger generation is bilingual, usually with English and one “mother tongue”. At the same time, proficiency in second languages has declined. While you’re in school, you have to be proficient in two languages. This gives young children a good proficiency, but this tends to decline as they get older. Many stop using their “mother tongue”, especially at university. As a result of young people’s language choices and their parents’ pragmatic approach, Malay, Tamil and Chinese are losing ground. An unfortunate consequence of the language situation in Singapore is that elderly who do not speak English or Mandarin have been marginalized. The language situation has changed so rapidly they have been unable to keep up.

Singapore is an ever-changing linguistic environment, and will continue this way. We cannot predict the future, but it is likely that the language shift away from Chinese, Malay and Tamil will continue, and that English will dominate even more.

Francesco Cavallaro is an Associate Professor in the Division of Linguistics and Multilingual Studies at Nanyang Technological University, Singapore. He has worked at various Universities in Australia and he is now living and working in Singapore. His research interests are in sociolinguistics and the social aspects of bilingualism, especially of minority groups in multilingual contexts.

He has published on language maintenance and shift, the demographics of the Italian community in Australia, language attitudes in Singapore and on the use of technology in the classroom. He is the author of the book Transgenerational language shift: From Sicilian and Italian to Australian English, published in 2010 by The Italian Australian Institute. La Trobe University, Melbourne, Australia. His main research focus is the survival of minority languages and the factors that influence both language maintenance and shift.