At Warruwi Community around ten Indigenous languages from five different language families are used among only 450 people.  Why are so many languages still spoken at Warruwi when linguistic diversity has sharply declined in the rest of Australia?  Visiting scholar Dr. Ruth Singer from the University of Melbourne held last week’s Wednesday seminar where she presented her research on this topic. 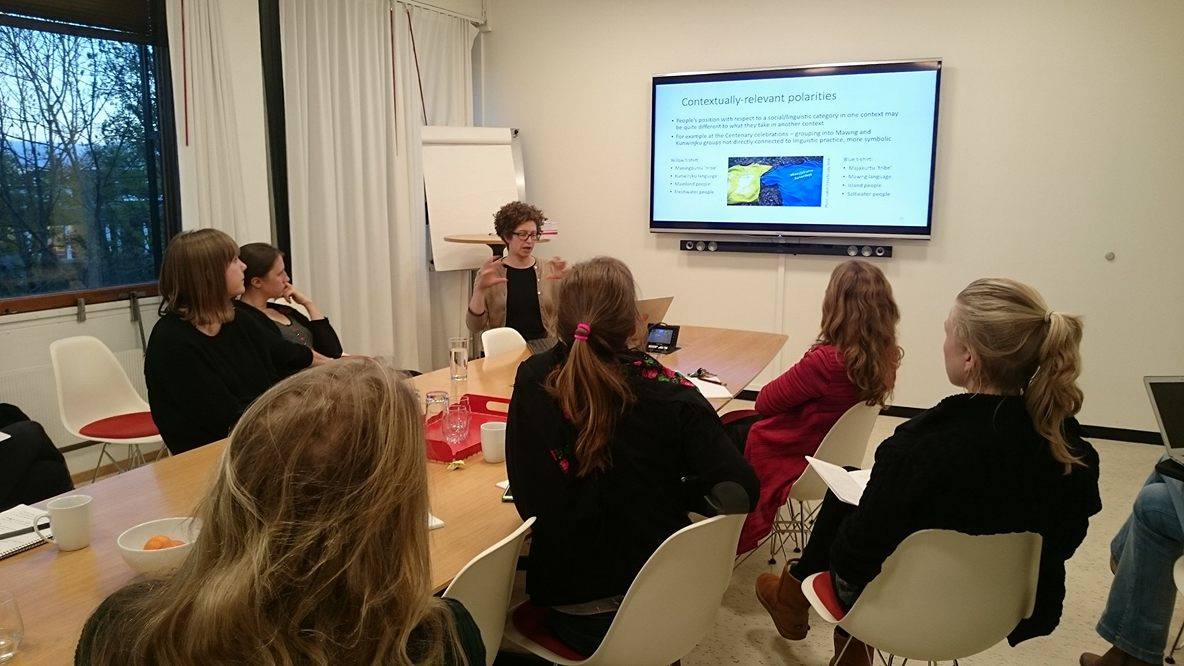 Warruwi is the main township on Goulburn Island off the Arnhem Land coast in the Northern Territory, Australia. Warruwi has traditionally been a nomadic area, where people travelled to trade, both from a wide area of the Arnhem Land, and from as far away as Indonesia. The community is thus interconnected with many other communities, and has been constantly reshaping and reforming itself over time.

Though small in size – only approximately 450 people live in Warruwi – around ten Indigenous languages from five different language families are spoken here. The community has high levels of multilingualism both at the individual and the societal level, and many inhabitants know a number of languages. Over several years, Dr. Ruth Singer has investigated how these languages coexist at small communities such as Warruwi, and what ideologies and practices that facilitate such small-scale multilingualism.

The traditional language of the island is Mawng, with the other most used Indigenous languages being  Kunwinjku and Yolngu-Matha. English is usually people’s second or third language. Adults in the community commonly speak two to four languages, and also understand many more. That is,  there is widespread receptive multilingualism in the community. Receptive multilingualism is the development of receptive competence in a language without spoken proficiency. It is common to avoid code-switching, but rather for each person to use a different language, which is understood by the person they are talking to.

The links between language and identity in the community are for instance expressed through the use of names of languages to refer to for instance different clans. In fact, in the community, language names are more often used to refer to social groups than to linguistic practices. Thus, people living at Warruwi might present themselves as being Mawng. The shift to language names also being used to refer to social groups also means that what people position themselves as might differ between contexts. Instead of positioning oneself based on linguistic practice, people can also position themselves in a more symbolic way, for instance via clan membership, or a broader descent group.

The research has shown that the relationships between language, identity and multilingualism at Warruwi are intricate, and that a more complex analysis might be necessary to understand further why so many languages are spoken at Warruwi.

Ruth Singer is a DECRA Postdoctoral Fellow in the Linguistics program at the University of Melbourne (Melbourne, Australia). Her postdoctoral project focusses on multilingualism at Warruwi Community. She also describes aspects of the Mawng language, spoken at Warruwi and works on the typology of nominal classification. She is the author of The Dynamics of Nominal Classification: Productive and Lexicalised Uses of Gender Agreement in Mawng published in 2016 (external link). Ruth is a member of the Research Unit for Indigenous Language, University of Melbourne, and part of the Wellsprings of Linguistic Diversity project, led by Prof Nicholas Evans, Australian National University (external link). She is current visiting the Crossroads project at SOAS, University of London (external link).