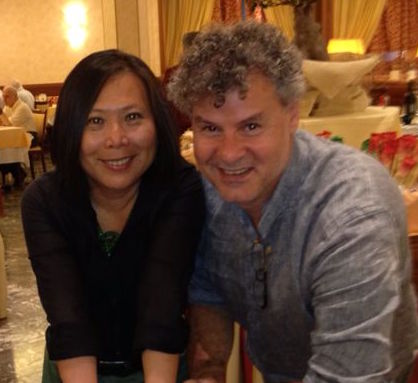 This married couple met in Australia at La Trobe University in Melbourne, where they were studying linguistics together. Now they both work in the Division of Linguistics and Multilingual Studies in Nanyang Technological University.

Francesco's research interests are in sociolinguistics, especially of minority groups in multilingual contexts. "Language maintenance and shift is my focus, to look at what happens to multilingual communities. Why people shift from one language to another, or why they abandon one language in favour of another. While I'm a sociolinguist in that respect, you cannot look at the phenomenon of people shifting, without looking at the social psychological aspects as well. And I'm doing that in Singapore now with ethnic groups which are slowly shifting away from the traditional languages."

Motivation in own bilingual situation

Francesco was himself bilingual when he started studying the field. He migrated with his family from Italy just after finishing primary school. "It was definitely a motivation for me. My PhD was on the Sicilian community in Australia. I lived with language shift happening around me all the time. While we in the family maintained our language, so many of our peers, cousins, friends, with the same background, instead turned monolingual. I've always wondered what's the play here?"

Bee grew up in a multilingual environment with Hokkien and Mandarin Chinese at home. "I worked out that the strange foreign language on television and in school was English, but that wasn’t until I was about seven", Bee says. When returning to Singapore 20 years later, she found that in her country, where everyone is bilingual, if not multilingual, there is much less interest in research on multilingualism. Instead, everybody takes great pride in speaking good English! Being blissfully unaware of monolingualism, encountering it as an undergraduate in Australia was a curious adventure for Bee. Mercifully, there was strong interest in bilingualism in Australian academia.

On June 8th, Francesco will give a lecture at MultiLing about the language shift in Singapore. The linguistic situation in Singapore has undergone dramatic changes in its 50 years of history. These changes include a rapid shift in the languages used by Singaporeans to English only and the demise of the Chinese vernaculars. "The problem with the smaller groups of immigrants is that they come to a country like Norway and they know that they have to learn Norwegian", says Francesco. "Then they say, well, do I teach my children for example Somali, or do I help them learn English instead? They know that their children need Norwegian, and if they're going to need a second language it has to be English. It's like that in Singapore. Being trilingual in Singapore now is very rare, and it used to be the norm. The parents are saying, well, I want my child to get a good education and a good job, and they're only going to get that through English, and maybe Chinese. Those are the two languages that are most important, in the Singapore context. It is well known that Singapore is a multilingual place."

Bee and Francesco's workplace at the university mirrors the multilingual Singapore. "Actually, the job description is that you need to work on another language, which you need when you do empirical work", says Bee. "In fact, we recently did a count of how many languages we have represented among 15 full-time members; I think it was forty something!"

A study of trains and fjords

The couple were in Norway five years ago at ISB8 - the International Symposium on Bilingualism - that many members of MultiLing organised. Still, they say, it feels like they've never been here before. The last time, they only saw the University of Oslo campus and the inside of the hotel in which they were staying. This time around they're making an effort to see more. In addition to giving their guest lectures at MultiLing, they will do a study of trains and fjords – on a trip to Western Norway.

Follow the links to read more about Bee and Francesco's lectures at MultiLing.