Dr. Pavlenko is originally from Ukraine, but emigrated to the US right before the collapse of the USSR—two unrelated incidents. She has had an impressive linguistics career and is very well-versed in many languages. At the Center, she will focus on communication in legal cases where refugees and immigrants are involved. 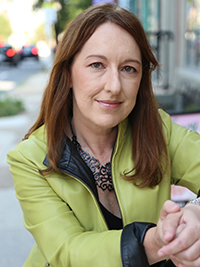 Dr. Aneta Pavlenko grew up in Kiev, Ukraine and left the USSR just before it collapsed (a coincidence, not a consequence). After a short stay in a refugee settlement in Torvaianica, Italy, she came to the United States and, being still young and idealistic, decided to get a doctorate. While in graduate school, she supported herself and her son by working as an interpreter and case worker for the Refugee Assistance Program in Ithaca, New York.

She received her Ph.D. in General Linguistics at Cornell University in 1997. Between 1998 and 2016 she was a Professor of Applied Linguistics at Temple University, Philadelphia and in 2014-2015 she served as President of the American Association for Applied Linguistics. Dr. Pavlenko’s research focuses on the relationship between multilingualism, cognition, and emotions. She has lectured widely in North America, Europe and Asia and has authored more than a hundred articles and ten books, the most recent of which is The bilingual mind and what it tells us about language and thought (Cambridge University Press, 2014).

She is the winner of the 2009 TESOL Award for Distinguished Research and 2006 BAAL Book of the Year award. She has testified in court as an expert in forensic linguistics and has co-authored the Guidelines for communicating rights to non-native speakers of English. In her spare time, she co-writes the blog Life as a Bilingual for Psychology Today (with François Grosjean). She has been with Multiling from the start as Member of the Scientific Advisory Board and is thrilled to join the Center as Research Professor.

Her work at MultiLing will focus on forensic linguistics, more specifically on communicative problems faced by refugees and immigrants in legal contexts, from police precincts to courts and prisons. She hopes to collaborate with colleagues and students on finding solutions to these problems and looks forward to mentoring young researchers. She speaks Russian, Ukrainian, Polish, English, French, and Spanish and hopes to add Norwegian to the list.

By Olaf Christensen
E-mail this page