Luca Onnis joined MultiLing in March 2022 as an Associate Professor in Multilingualism. 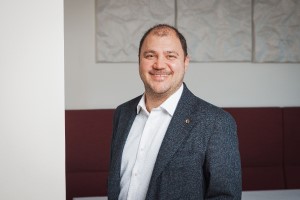 Dr. Luca Onnis has recently joined MultiLing/ILN as an Associate Professor. When asked about his academic interests, he shows his enthusiasm for his field of research: “We are finding that at all levels of analysis, human languages can be characterized by a rich latent statistical structure. At the same time, we are starting to understand that the brain is a powerful statistical learning machine. Then perhaps the learnability of human languages hinges exactly on learning mechanisms that become exquisitely tuned to extract structure (phonology, meaning, grammar, pragmatics) from the statistics of the languages”, explains Luca. “And specific linguistic experience plays a large role, both as children and adults.”

His academic journey began as an undergraduate student of Translation Studies at the University of Bologna in Italy. The time coincided with the high point of the corpus movement in the late 1990s. “It was exciting to be able to analyze and discover real language patterns using unprecedented large corpora of text via a computer,” says Luca.

Corpus studies offered a novel and unifying perspective to understand human languages beyond the ‘words and rules’ binary. After acquiring a PhD in psychology from the University of Warwick, and being a research associate at Cornell University, Onnis held teaching positions at the University of Hawaii, USA and Nanyang Technological University, Singapore.

It is Luca’s first time in Norway. “It was not an easy decision to move the entire family permanently without the possibility to actually see the place ahead of time, due to Covid restrictions at the time of the job interview.” But this concern was quickly replaced with a feeling of satisfaction. When he hailed the last train in the evening from the Oslo Airport in the wrong direction, other passengers readily helped him with great empathy about where to get off and how to correct his path to the Oslo centre.

“MultiLing is a natural place for me,” he answers promptly and continues: “I started with translation studies, which actually deals with multilingualism. My wife's mother tongues are Mandarin and English. Our two daughters, 4 years and 20 months old respectively, are growing up in a multilingual family and world. And MultiLing is a prestigious Center of Excellence for research on multilingualism.

There are several burning questions Luca wants to answer: For example, are better language learners also better statistical learners? Do parents and caregivers implicitly enhance the statistical properties of their speech to maximize language learning of their children? Do children, in turn, adapt to the rich diversity of statistical cues inherent in different languages? And beyond, can the social structure in which learners and speakers are embedded alter the statistics of language interaction, and what does it mean for language acquisition and change?

Luca will work with and train new students and researchers in various methods available in the Socio-cognitive lab. He also looks forward to collaborating with the ILN Text Laboratory to create corpora from children's early exposure to different language sources. “We do not know how reading books to preliteracy children impacts early language and reading skills, but we suspect it does it big time. Feeding children with a healthy language diet appears as important as feeding them with healthy food,” Luca concludes.