Quentin Williams, senior lecturer at the University of the Western Cape, South Africa, returned to MultiLing for a month long stay in October. 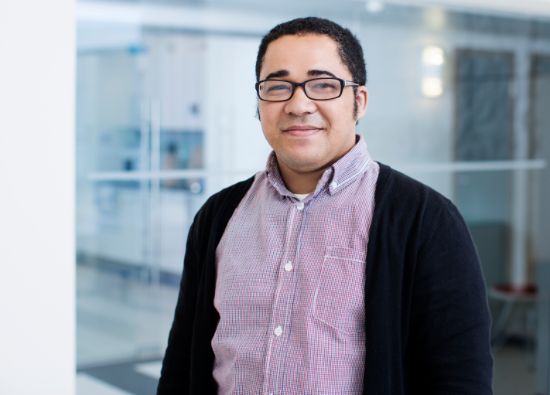 Quentin Williams was one of MultiLing's very first visiting scholars, when he spent a year in Oslo in 2013-14 through the Research Council of Norway's Yggdrasil mobility programme. This fall, Williams returned to Oslo for a month long stay as a visiting scholar at MultiLing.

"It has been a great intellectual experience to be back at MultiLing, and during a time when some of the world's top sociolinguists have been visiting the center," Williams says. "The month I stayed has been enriching and I much enjoyed reacquainting myself with the center`s research, seminar and workshops, and the vibrant and energetic milieu of graduates and visiting scholars."

During his stay at MultiLing this fall, Williams has been writing drafts of chapters that will be part of his new monograph on youth culture and non-racial multilingualism in South Africa. The book charts the historical racialization of multilingualism, and outlines in great detail what a non-racial multilingualism should have looked like, could look like, and/or could be in a non-racial South Africa. "The time I have spent at MultiLing has given me invaluable moments to pause, ponder, reflect, reframe, revise, and rewrite with great focus some of my initial thoughts and arguments in the many chapters I already have," says Williams.

This time around, Williams visited MultiLing through our INTPART partnership project, which aims to draw attention to southern experiences of multilingualism, mobility and diversity. Williams says he believes the INTPART project has been an important part of the mobility of scholars between MultiLing and the four South African universities in the project: "the research and intellectual exchange between our universities and centers has been nothing but transformative for young scholars (PhD/MA students) in the project. The contact they have had with senior/established scholars have introduced them to a varied of perspectives, ideas, ideologies, theoretical positions and methodologies." Williams also points out the importance of the project for senior scholars; the project has afforded them to sustain current networks and establish new ones, test out their ideas and theoretical positions, and recruit younger scholars.

Quentin Williams is a Senior Lecturer in the Linguistics Department at the University of the Western Cape, South Africa. His research interests include multilingualism, popular culture in postcolony (specifically hip hop), linguistic citizenship, linguistic agency, voice and marginiality, and youth, race, gender, space and place.