Postdoctoral Fellow - Center for Multilingualism in Society across the Lifespan 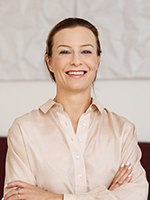 Oliwia Szymanska is a postdoctoral researcher at MultiLing Center for Multilingualism in Society across the Lifespan. She has a doctoral degree from Adam Mickiewicz University in Poznan, Poland. Previously, she worked as a senior lecturer in Norwegian as a second language at the University of Oslo. Before moving to Norway she was an assistant professor and leader for Norwegian language studies at University of Social Sciences and Humanities in Warsaw. For many years, she has also taught Norwegian to physicians within specialist healthcare, published teaching materials, and developed a language proficiency test for Polish Ministry of Foreign Affairs. Oliwia investigates different aspects of second language acquisition in Polish speakers of Norwegian deploying conceptual transfer hypothesis. Currently, she focuses mainly on the comprehension and production of L2 metaphorical expressions, and L2 Norwegian in specialist healthcare.

My main field of research is different aspects of second language acquisition and transfer studies with a special interest for conceptual transfer. My doctoral thesis in Norwegian as a second language elaborated on how Polish learners of Norwegian render basic spatial relations in the target language. At present I focus on the comprehension and production of Norwegian metaphorical expressions, and communication in Norwegian specialist healthcare, where many Polish learners are involved, both as physicians and patients.

The project (TEA) investigates the use of grammatical tenses in Norwegian spoken by Polish doctors in Norwegian healthcare. The data used in TEA are recordings of authentic interactions involving Polish doctors speaking L2 Norwegian, transcribed and used for linguistic analyses. This postdoctoral project is a sub-project of NorPol: L2 Communication among Polish migrants in Norway.