MultiLing Dementia: Language and Communication in Multilingual Speakers with Dementia in Norway (completed) 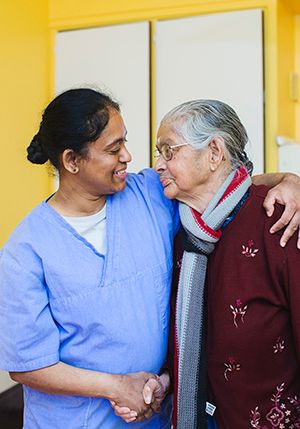 The project combines psycholinguistic and sociolinguistic approaches to language and communication, using data from linguistic and cognitive tests, recordings of spontaneous speech and naturally occurring conversations with significant others and caretakers.

Subproject 1 investigates how language storage and processing are affected by dementia.

Subproject 2 investigates which communicative strategies PWDs and their conversation partners use to compensate for such problems.

Finally, subproject 3 analyzes how questions about ageing, dementia and language are represented in the media.

Publications from the project

One of the landmark publications from the project is the book Multilingualism and Ageing: An Overview (de Bot, Plejert, Simonsen, Fyndanis, Hansen, Norvik, Svendsen, Svennevig, 2020).

This book reports results from all three subprojects and provides an overview of research on a wide range of topics relating to language processing and language use from a lifespan perspective.

It is unique in covering and combining psycholinguistic and sociolinguistic approaches, addressing questions such as: Is it beneficial to speak more than one language when growing old? How are languages processed in multilinguals, and how does this change over time? What happens to language and communication in multilingual aphasia or dementia? How is multilingual ageing portrayed in the media?

Furthermore, instead of looking at ageing mainly as decline, the basic perspective in the book is a "non-deficit view" that sees ageing as change and as an accumulation of experiences. This is also important in a clinical setting: Through focusing on what is there, instead of focusing on what possibly is lost, the full repertoire of a multilingual person can be activated and encouraged.

Subproject 1 has documented the decline in language processing due to Primary Progressive Aphasia, a specific type of dementia that affects language in particular. Lind, Simonsen, Ribu, Svendsen, Svennevig, de Bot (2018) analyzes the naming skills of a bilingual English/Norwegian speaker in each of his languages across three different speech contexts: confrontation naming, semi-spontaneous narrative (picture description), and conversation, and at two points in time: 12 and 30 months post diagnosis, respectively.

The results show that his performance in his second language (L2) is lower than in his first language (L1), but this difference diminishes as the disease progresses. The test results show effects of word class, frequency, and cognateness on his naming skills. In contrast to his word finding problems documented in linguistic tests, the study of his performance in conversation shows that he manages to overcome and compensate for the word finding problems by a range of communication strategies, such as paraphrase, explanations and language alternation.

The subproject has also identified connections between word-finding difficulties, word search strategies and clinical diagnosis. Hansen, Landmark, Svennevig, Simonsen and Knapskog (in prep.) and Landmark, Hansen, Svennevig, Simonsen (in prep.) show that finding problems and searches were more common for verbs than for nouns, and more common the lower the frequency and imageability of the targeted word. Successful search sequences often involved multimodal resources, such as gestures and gaze. There was substantial individual variation in performance and resources employed, partly attributable to the severity of the dementia.

Results demonstrate that cognateness can be ranked on a continuum and reveal measure- and modality-specific effects. Hansen, Norvik, Simonsen, Strangmann, Antolovic and Obler (in prep) investigates lexical effects on the nouns and verbs used by multilinguals with and without dementia when asked to tell a short story based on a cartoon, in a second language. Both clinical groups used more cognates and higher-frequency words than the control group, underlining the role of frequency on word retrieval.

Subproject 2 has identified a range of communicative strategies used to compensate for dementia-related communication problems. One article describes a strategy for overcoming problems with word retrieval, namely producing the word in a different language, so-called code-switching (Svennevig, Hansen, Simonsen and Landmark, 2019). It shows that code-switching is successfully used as a resource for compensating for word-retrieval problems in two different speech contexts, picture naming tests and spontaneous conversation. The code-switches are overwhelmingly appropriate and adapted to the language background of the interlocutor, and only very few instances may be interpreted as caused by reduced episodic memory or a lack of inhibition.

Two studies deal with how interlocutors deal with manifest memory problems in conversation. One describes conversational practices used to account for the PWDs inability to answer questions about personal history (Svennevig and Landmark, 2019). First, accounts may normalize the lack of knowledge by presenting it as a common problem; second, they may exceptionalize it by attributing it to the illness; and third, they may justify it by claiming that the information is not important. Such accounts seek to avoid loss of face and thus constitute resources for handling the social sensitivity of displaying memory problems. Another typical challenge in dementia communication is how to deal with claims by PWDs that are manifestly wrong or incorrect. Landmark, Nilsson, Ekström and Svennevig (2021) investigate how partners correct claims made by PWDs on matters within the latter’s domain of knowledge, typically personal history. The article focuses on how the couples manage these conflicting knowledge claims and negotiate rights to knowledge. It shows how partners may deal with problematic knowledge claims by PWDs in ways that reduce the sensitivity of correcting, while still treating them as competent participants in the interaction, epistemically accountable for their factual claims.

Two studies deal with another typical problem for PWDs, namely taking initiatives and pursuing extended communicative projects in conversation. In a case study of a video recorded homecare-visit between a PWD and his homecare nurse, Landmark & Svennevig (in press) focuses on an extended factual disagreement between the parties and a related negotiation of a practical problem. The study explores how a person with dementia manages to mobilize remaining communicative resources for initiating and pursuing a topical agenda over a series of sequences, as well as how the caregiver recognizes and supports these initiatives. A different type of challenge for PWDs in conversation is storytelling. Svennevig & Hamilton (in press) investigates how PWDs manage to tell extended stories in multiparty conversations, both in a domestic context, a sociable lunchtime conversation with friends, and in an institutional context, a weekly meeting of an early-memory-loss support group. It identifies the interlocutors’ interactional practices that prove successful in promoting and scaffolding the PWDs’ storytelling without making their memory problems manifest or telling the story for them.

Subproject 3 has investigated how dementia and language is represented in media discourse. Siiner (2017) presents a content analysis of articles on dementia published in Norwegian paper media in 1995-2015. It shows that the focus in Norwegian dementia discourse has changed from the disease to the personhood. Yet, the agents defining what it means to live well with dementia continued to be predominantly institutional: NGOs, municipalities, health care institutions, and politicians. An analysis of the uses of the politically incorrect Norwegian term for dementia, ‘senility’, revealed that this term offered an alternative to the institutionalized dementia discourse and functioned as an unconventional and therapeutic free space where older people and persons with dementia could use humor to subvert the established norms and power relations.

Another study investigates how ‘immigrants’ and ‘immigration’ are portrayed in media discourses on dementia and how these representations have changed over time. Svendsen and Diepeveen (in prep) shows that people with dementia barely have a voice in the media, and immigrants with dementia, hardly at all. The depictions reflect or imply a view on immigrants as potential challenges for the Norwegian welfare model: when they grow old, they will lose their Norwegian competence, and cause problems for health care. On the other hand, immigrants are presented as the “saviours” of the welfare model in taking care of our elderly. Linguistic, cultural and social diversity is erased in these media representations, and a dichotomy ‘us’ and ‘them’ is prevalent.

Publications for practitioners and the general public

The project has conducted extensive communication and dissemination activities. In collaboration with our collaboration partner, Alison Wray (Cardiff University), we have published a series of six cartoon films on YouTube in English and Norwegian, giving advice on communication involving multilinguals with dementia: Dementia communication across language boundaries / Demens og kommunikasjon på tvers av språk. In addition, we have contributed to a handbook for health care personnel (published in five Nordic languages) on communication in dementia care (Telenius et al. 2020). Finally, the core group members have written several opinion pieces in journals for health care personnel and had presentations at research dissemination events.