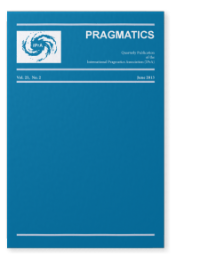 Access the article on the homepage of Pragmatics: Quarterly Publication of the International Pragmatics Association.