Capitalizing on National Diversity: Modern Ideologies of Multilingual Switzerland and the Regimentation of the Nation's Promotion under Late Capitalism 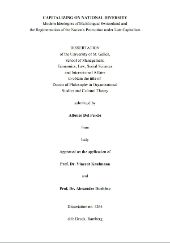 This dissertation analyzes how late capitalism affects Switzerland’s investment in national multilingualism. Through a genealogical sociolinguistic analyses of governmental discourses, produced between 1970 and 2008, on the promotion of Switzerland abroad, and drawing on archival data such as reports, minutes, and expertise, I discuss the government’s construction of Swiss multilingualism as a promotional argument and analyze how and why Swiss capitalization on multilingualism changes over time. I furthermore demonstrate that Swiss multilingualism is instrumentalized by governmental actors as a capital of distinction that is employed to globally position the Swiss economy, culture, and tourism industry. Multilingualism is constructed in Switzerland as a form of added value to maintain the country’s competitiveness in a political-economic environment characterized by an accelerated deregulation of national markets, a transnationalization of economic exchanges, and increasing competition between nations. My analysis also highlights multilingualism's promotional value and demonstrates how Swiss multilingualism, as conceptualized and defined by political actors, is not constant, but rather adapted to meet to the addressed markets needs. Moreover, the analysis shows how the economic appropriation of Swiss multilingualism and its hybrid and constantly changing conceptualization does not conflict with an ideology of national multilingualism that draws on standardization, ethnicity, and fixity. In addition, the changing aspects of this construction do not necessarily imply a rupture with how language is instrumentalized to legitimize sociocultural relations of difference. Indeed, while actors participating in discourses on the promotion of Switzerland tend to valorize what is traditionally considered to be “bad” diversity (linguistic diversity resulting from poorly qualified immigrants), in reality it provides the economic elite in Switzerland with a means to capitalize on a resource existing within Swiss territory with the end of reproducing the status quo in the distribution of capital in Swiss society.

Access the theses on the homepage of St. Gallen University.