New speakers, new language: On being a legitimate speaker of a minority language in Provence

Journal article by James Costa in International Journal of the Sociology of Language, volume 2015, issue 231, 2015. 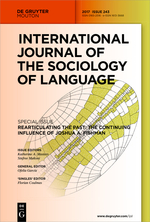 This article looks at the “new speaker” concept and the questions it raises in terms of legitimacy from the point of view of several types of social actors, namely language advocates, academics and school pupils (that is to say, “new speakers” themselves). The aim of this article is to show that this notion is not a purely descriptive one, but also carries a strong prescriptive loading – which in turns requires that minority language learners negotiate their participation in linguistic markets. Based on fieldwork in Provence, I look at how “new speakers” are often construed as speakers of “new languages”, “standard” or “artificial” languages that tend to index youth, urbanity, modernity and middle class membership – all qualities which may be seen as undesirable in parts of minority language movements. I then turn to pupils of an Occitan bilingual primary school in Provence and analyse how they reframe the new speaker debate in order for themselves to fit in the broader picture of Occitan speakers. All the viewpoints I analyse tend to emphasise the weight that the traditional, monolingual speaker still holds among speakers of minority languages in southern France.

Access the article on the homepage of International Journal of the Sociology of Language.