Chapter by Guri Bordal Steien in Prosody and Language in Contact. L2 Acquisition, Attrition and Languages in Multilingual Situations, 2015. 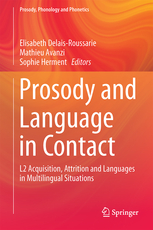 The aim of this chapter is to present some characteristics of the prosodic system of Central African French (CAF), and to show how this variety of French is influenced by the lexical tone system of its main substrate language, Sango. CAF is spoken in the Central African Republic (CAR), a former French colony in Africa, which has kept French as an official language after decolonization. I will focus on prosodic patterns attested in spontaneous speech produced by 12 speakers from the capital of the CAR, Bangui.

Access the chapter on the homepage of Prosody and Language in Contact. L2 Acquisition, Attrition and Languages in Multilingual Situations.