A 'new' speech style is born. The omnipresence of structure and agency in the life of semiotic registers in heterogeneous urban spaces 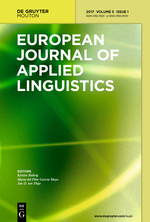 The aim of this paper is to contribute to the sociolinguistic discussion about the need for a unified sociological theory, by applying realist social theory (RST) (Carter and Sealey, this volume) to the total linguistic fact (TLF) (Silverstein 1985) or to the semiotics of ‘new’ speech styles in heterogeneous urban spaces. We explore, with data from Belgium (Flanders, Limburg) on Citétaal and Norway on so-called kebabnorsk, the ways structure and agency are omnipresent in the enregisterment of these semiotic registers. Through media discourse analyses, we investigate essential parts of this enregisterment process, in particular the invention and diffusion of labels and the assignment of stereotypical indexical values to these speech styles and to their alleged speakers. We demonstrate, in line with other studies, that media in interplay with scholars is a key force in the enregisterment of these speech styles. In the analysed media discourse, kebabnorsk and Citétaal are constructed as a ‘mixed language’, as a countable and uniform entity, the use of which inevitably results in unemployment. The alleged language users are constructed as a homogeneous group, namely ‘young people with migrant backgrounds’. It is shown that social structure, including asymmetric power relations and language hegemonies, are omnipresent in the valorisation of these registers and that media discourses rely on language ideologies of unity and purity, ideologies central to a monolingual orientation. We advocate a translingual orientation towards language and communication in which communication transcends languages and involves negotiation of mobile resources. This orientation captures the ontology of language and communication and has, as such, the potential to empower the language users’ individual agencies.

Access the article on the homepage of European Journal of Applied Linguistics.